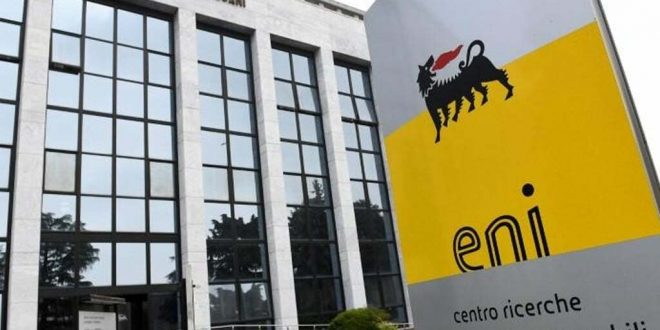 Italy’s Eni to Pull out of Russia-Turkey Pipeline

Italian oil giant Eni said Tuesday it would withdraw from the Blue Stream gas pipeline linking Russia to Turkey, in which it has a 50 percent stake.
“Eni intends to sell its stake” in Blue Stream, a company spokesman said, following moves by rivals BP and Shell to divest from Russia-linked projects after Moscow invaded Ukraine.
The company controls the gas pipeline — which links the two countries via the Black Sea — equally with Russian energy giant Gazprom.
“Eni’s current presence in Russia is marginal” and joint ventures with Russian energy giant Rosneft linked to exploration licences in the Arctic “have already been frozen for years” due to sanctions imposed on Russia since 2014, the spokesman said.
Russia launched an invasion of Ukraine on Thursday, triggering a wave of international condemnation and Western economic sanctions against Moscow. Shell announced on Monday it would sell its stake in all joint ventures with Gazprom, after Russia launched the operation.
That included its 27.5 percent share in the oil and gas project Sakhalin-2, on Sakhalin island in Russia’s far east.
It would also end its 50 percent interests in the Salym oilfield development in western Siberia, and the Gydan exploration project in the Gydan peninsula, in northwest Siberia.
On Sunday, BP announced it was pulling its 19.75 percent stake in Rosneft, and chief executive Bernard Looney said he was resigning from the Russian company’s board with immediate effect.
BP shares slumped on Monday, wiping billions of dollars from the company’s value.
French energy giant TotalEnergies on Tuesday announced it would no longer provide capital for new projects in Russia but would not withdraw from current projects in which it was invested.
Russia is preparing a presidential decree aimed at preventing foreign investment exiting the country, its prime minister said Tuesday, after Moscow was hit by the barrage of sanctions.
“To enable businesses to make informed decisions, a draft presidential decree has been prepared to introduce temporary restrictions on exiting Russian assets,” Prime Minister Mikhail Mishustin said.