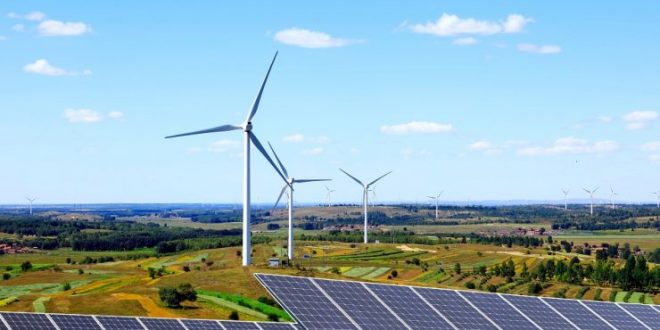 Kazakhstan plans to attract investments from Azerbaijan to fund renewable energy projects, the country’s trade and integration ministry said.
“Our countries have launched various projects in the field of oil and gas, subsoil use, and several other sectors,” Trend quoted the ministry as saying on Saturday.
“However, there is no cooperation in the field of renewable energy, and we are interested in attracting Azerbaijani investments in the implementation of projects in this area.”
The ministry noted that Kazakhstan pays great attention to the development of the renewable energy sector and expects to achieve target indicators in this area under the Concept for transition to a “green economy.”
Adopted in 2013, the Concept envisages the share of renewable energy in the nation’s total energy grid reaching 10 percent by 2030. However, earlier this year, Kazakhstani President Kassym-Jomart Tokayev instructed the government to bring the figure up to 15 percent. The document ultimately aims for at least half of Kazakhstan’s electricity to come from renewable sources by 2050.
Kazakhstan sits atop one of the world’s largest reserves of fossil fuels, ranking the world’s ninth-largest crude oil exporter and holding three percent of the world’s total oil reserves. The oil and gas industry has long been one of the main drivers of Central Asia’s largest and wealthiest economy. Meanwhile, that is not stopping Kazakhstan from possibly expanding energy production capacity using renewable resources.
According to data compiled by the country’s energy ministry, Kazakhstan produced 108 billion kilowatt-hours (kWh) of electricity in 2020, of which 3.24 billion were generated from renewables. Currently, there are 116 renewable energy facilities in the country with an installed capacity of 1,685 MW.
Meanwhile, the country’s wind and solar potential are substantial. With more than half of the country’s territory seeing average wind speeds of 4 to 6 meters per second – suitable for energy generation, Kazakhstan has significant renewable energy potential. According to EBRD’s data, the most promising areas include the northern and central regions and the Caspian Sea region.
Given the vast potential for renewable energy development, Kazakhstan’s authorities are working to install new capacity across the regions and near the inhabited settlements that dot the Kazakh steppe.
To make this happen, the country created a better environment to attract major investments into the industry, introducing a 15-year feed-in-tariff (FiT) mechanism. In 2018, the country’s energy ministry launched renewable auctions, making selecting projects and investors more transparent and understandable. At the same time, thanks to the auctions, officials in Nur-Sultan can bet on more efficient technologies and projects that will reduce the impact of renewable energy capacity introduction on end consumers’ tariffs.
Kazakhstan has been working closely with several financial institutions, including European Bank for Reconstruction and Development (EBRD), to diversify its economy. To date, cumulative EBRD investment into the country amounted to €8.4 billion (nearly $10 billion), of which about €1.2 billion ($1.5 billion) is invested in sustainable energy and resources.