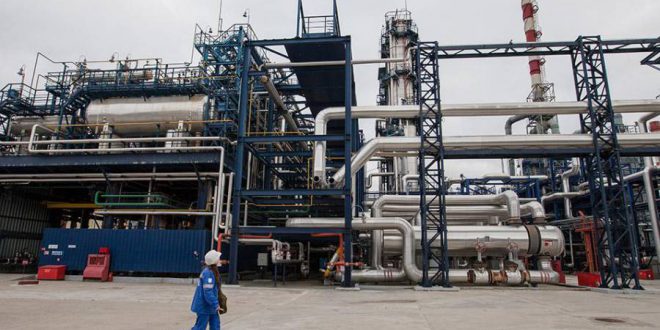 The Gazprom Management Committee has taken note of information about the status of the Company’s major investment projects.
Within the Eastern Gas Program, Gazprom continues to ramp up its production and gas transmission capacities.
At the Chayandinskoye field in Yakutia, the Company is setting up the facilities required to bring the field to its design annual output of 25 billion m3 of gas. Specifically, efforts are underway to expand the operating Comprehensive Gas Treatment Unit (CGTU) that feeds gas into the Power of Siberia gas pipeline. In addition, the membrane unit for helium concentrate extraction is expected to come on-stream in 2020.
Production drilling is in full swing at the Kovyktinskoye field in the Irkutsk Region. Seven drilling rigs are currently in operation, and this number is going to be raised to 18 next year.
In 2020, it is planned to, among other things, complete the construction of the second compressor station, named Ivan Moskvitin, on the Power of Siberia gas pipeline. The Company intends to start building the pipeline section between Kovyktinskoye and Chayandinskoye in the third quarter of 2020.
The progress of the Amur Gas Processing Plant construction project is at 58%. Installation of the core equipment of the first and second production trains is nearly finished, and said equipment is being prepared for start-up and commissioning. Gas separation equipment is being installed on the third and fourth production trains. The launch of the Svobodny TPP, which has a capacity of 160 MW and will provide the Plant with electricity, is scheduled for late 2020.
The Sakhalin-Khabarovsk-Vladivostok gas pipeline is undergoing an expansion, with 66 km of approximately 390 km of its linear part already built at the section between Komsomolsk-on-Amur and Khabarovsk.
In the Yamal Peninsula, Gazprom plans to, inter alia, bring 52 new gas wells on-stream at the Bovanenkovskoye field in 2020. At the Kharasaveyskoye field, the Company is beginning to weld pipes for gas collection headers and the connecting gas pipeline stretching to Bovanenkovskoye. This year, it is also planned to start production drilling and the construction of a CGTU and a booster compressor station at Kharasaveyskoye.
Gazprom is consistently expanding the northern gas transmission corridor. Compressor stations and workshops are being set up at the Bovanenkovo-Ukhta 2 and Ukhta-Torzhok 2 gas pipelines. Also ongoing is the project for enhancing gas transmission capacities between Gryazovets and the Slavyanskaya compressor station, which is currently being built.
Construction is in progress at the LNG production, storage and shipment complex near the Portovaya compressor station.
The issue of the status of the Company’s major investment projects will be submitted for consideration by the Gazprom Board of Directors.