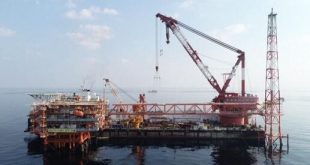 BP to Sell Oil, Gas Assets Even If Prices Rebound

German Chancellor Angela Merkel said on Wednesday that proposed US sanctions against the Nord Stream 2 gas pipeline from Russia were law-defying and would be dealt with.
“We think that extraterritorial sanctions, like the ones imposed by the US, do not match our understanding of what is legal. This concerns the currently debated second tier. We must admit this is complicating the construction. We believe that completing this project would be the right thing to do and we will act accordingly,” she said in parliament.
The bipartisan proposal to expand sanctions to companies involved in the undersea pipeline’s construction come on top of December penalties targeting pipe-laying vessels. The head of the state Ukrainian energy giant Naftogaz traveled to the US in March to lobby for more sanctions in a bid to safeguard Russian gas transit fees.
Merkel said her government had made sure that Ukraine would get its share of Russian money by mediating a five-year deal between the two neighbors that will see Russian natural gas continue to flow through Ukraine.
“We are dealing primarily with an economic project that naturally also has political implications. That is why the federal government worked so hard to negotiate a gas transit deal with Ukraine for the coming years to secure Russian gas transit and related transit fees,” she said.
The US has claimed that it aims to reduce the European Union’s energy dependence on Russia by denying Moscow capabilities to boost gas exports and reroute transit around Ukraine. But Germany argued last month that new US sanctions would interfere with European sovereignty and energy security.