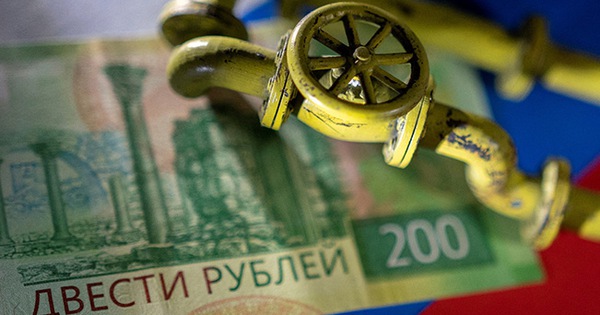 Ten more European buyers of Russian gas have opened accounts at Russia’s Gazprombank, designated by Vladimir Putin to process the ruble-for-gas payments that he demands from now on, a source close to Russia’s gas giant Gazprom told Bloomberg on Thursday.
So far, 20 companies from Europe have already opened accounts at Gazprombank, and 14 others have asked for the paperwork necessary to open such accounts, Bloomberg’s source said.
Russia wants its gas to be paid in rubles via two accounts at Gazprombank—one in euros or U.S. dollars and the other one in rubles. The European Union has been concerned that the payments in rubles would violate the recently imposed EU sanctions against Russia and its central bank.
The current terms of the ruble-for-gas payment scheme mean that the transaction is completed when the buyer deposits the payment in the foreign currency, which is then automatically converted into rubles without the involvement of the Bank of Russia, according to the source close to Gazprom who spoke to Bloomberg.
Some companies, especially in major Russian gas customers such as Germany, have been preparing to pay for the gas in rubles for some time. Others, like the ones in Poland and Bulgaria, refused to pay in rubles, and Gazprom stopped gas deliveries to those two EU member states at the end of April.
As the EU warns companies against paying for Russian gas in rubles, Italy’s Prime Minister Mario Draghi stated the opposite on Wednesday, saying that European companies are free to pay in Russian currency without finding themselves in breach of sanctions that lack clarity.
“There is no official pronouncement of what it means to breach sanctions,” Draghi said during a press conference on Wednesday, as reported by Bloomberg. “Nobody has ever said anything about whether ruble payment breach sanctions.”
In Germany, one of the largest natural gas importers, VNG, has opened an account with Gazprombank for payments for Russian gas under Moscow’s new terms, according to Reuters.