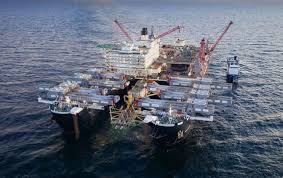 The US Congress has recently approved the annual Defence Authorisation Bill, which among other things included a fresh bunch of sanctions targeting the joint pipeline project by Russia’s Gazprom and several European energy giants, after previous measures failed to thwart its construction.
The Nord Stream 2 pipeline “will never carry Russian gas” an anonymous Trump administration official told the German agency DPA in an interview.
The official alleged that if Nord Stream AG – the pipeline’s operator responsible for its construction – could finish the project, it would have already done so by now.
The source did not elaborate on how Washington plans to ensure that the pipeline never functions as intended. The US has been trying to prevent the venture from being constructed, with sanctions implemented in 2019, but so far has failed to achieve its stated goal. After a Swiss contractor withdrew from pipe laying operations over the threat of sanctions, Nord Stream AG found a replacement that started working on 11 December.
At the same time, the US Congress recently passed a new row of measures designed to kill the project, as part of the annual Defence Authorisation Bill. It is unclear how it will affect the completion of the pipeline, which is 90% ready, according to Nord Stream AG.
Economic, Not Political Project
The US administration has been pressuring the EU to drop the Nord Stream 2 project with Russia despite many of these same nations and European energy giants being interested in the construction of the pipeline, which will double the amount of gas that Russia can sell to Europe. Natural gas plays an essential role in the EU’s plans for transitioning to green energy by the middle of the century.
Washington claims that Moscow will use the pipeline as leverage, but Germany, one of the main champions of the project, insists that it’s purely economic and not a political venture. Still, the US threatened European states with sanctions demanding they switch from Russian gas to more expensive LNG, produced in the US or elsewhere. While the EU has not ruled out the use of LNG, they’ve also not abandoned their hopes for the Nord Stream 2 to be completed either.