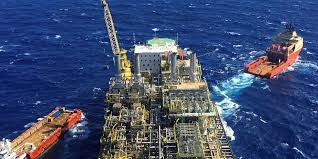 Oil extended its slide in Asia, trading at near two-decade lows after agreed cuts by the biggest producers were seen barely making a dent in the demand destruction wrought by Covid-19 and on increasing concerns that traders are quickly running out of room to store crude.
Futures in New York dropped as much as 5.5% to the lowest since November 2001, following a 20% slump last week. China reported its first economic contraction in decades on Friday, a sign of how bad things could get in Europe and North America, which have yet to emerge from virus lockdown.
Near-term prices for U.S. West Texas Intermediate crude are trading at huge discounts to later-dated contracts on concern the storage hub of Cushing, Oklahoma, will fill to capacity. That has seen prices disconnect from Brent futures in London.
“Concern continues to mount that storage facilities in the U.S. will run out of capacity,” ANZ Research said in a note. “Stockpiles at Cushing, the pricing point for WTI, are up nearly 50% since the start of March.”
Still, there were at least grounds for cautious optimism at the weekend. New York Governor Andrew Cuomo said the state may be past the high point of coronavirus deaths, as cases and fatalities slowed. Fewer daily deaths were also reported in Italy, Spain and the U.K.
Hedge funds were once again caught out by crude’s alarming descent, increasing their net-bullish position by 13% in the week ended April 14. It was the second straight week money managers boosted their net-long position in the face of 20% price drops in both weeks.
The price collapse is reverberating across the industry: oil explorers shut down 13% of the U.S. drilling fleet last week as the swelling worldwide glut of crude spurred drastic cost-cutting and project cancellations among drillers.
Crude prices in America’s oil capital are getting dangerously close to zero, with buyers in Texas offering as little as $2 a barrel for some oil streams, raising the possibility that producers may soon have to pay customers to take crude off their hands.

Previous Shell Commits to Achieving Net Zero Emissions by 2050
Next U.S. Oil Falls more than 10% to Lows not Seen since 1999