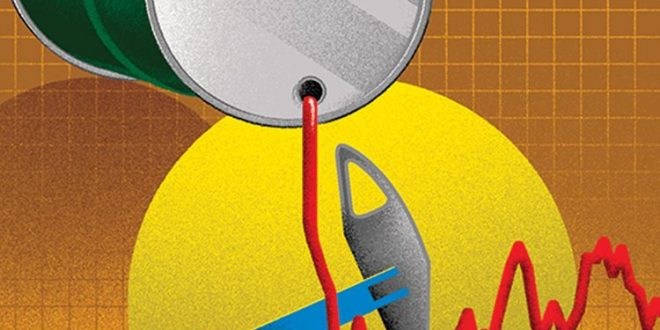 Oil prices fell by more than $1 on Tuesday as concerns over a possible recession and China’s COVID-19 curbs outweighed an expectation of tight global supply and a pick-up in fuel demand with the U.S. summer driving season.
Brent crude futures for July fell $1.34, or 1.2 per cent, to $112.08 a barrel by 0606 GMT. U.S. West Texas Intermediate (WTI) crude futures for July delivery dropped $1.28, or 1.2 per cent, to $109.01 a barrel.
Brent gained 0.7 per cent on Monday while WTI settled nearly flat.
Multiple threats to the global economy topped the worries ofthe world’s well-heeled at the annual Davos economic summit,with some flagging the risk of a worldwide recession.
International Monetary Fund Managing Director KristalinaGeorgieva said she did not expect a recession for majoreconomies but could not rule one out.
“Investors were selling off as they expected higher oil prices to dent consumption for fuels worldwide,” said Toshitaka Tazawa, an analyst at Fujitomi Securities Co Ltd.
While Shanghai, China’s commercial hub, aims to normalise life from June 1 as its coronavirus caseloads decline, an increase in new COVID-19 cases in Beijing has raised concerns for further curbs.
The Chinese capital detected 99 new cases on Sunday, up from 61 the previous day – the largest daily tally so far during a month-old outbreak that has consistently seen dozens of new infections every day.
“China’s COVID lockdowns are certainly playing a substantial role that weighs on fuel and energy demand outlook, with Beijing reporting rising positive cases, making investors concerned about expanding lockdowns into another business hub apart from Shanghai,” said Tina Teng, an analyst at CMC Markets.
Losses were limited by expectations that gasoline demand would remain high amid tight supplies.
The United States is set to enter its peak driving season beginning on Memorial Day weekend at the end of this week.
An embargo on Russian oil imports will likely be agreed on by the European Union “within days,” according to its biggest member Germany, as Moscow said it saw its economic ties growing with China after being isolated by the West over its invasion of Ukraine.
The world is facing an oil supply crunch, with most companies afraid to invest in the sector as they face green energy pressures, the head of Saudi Aramco told Reuters, adding it cannot expand production capacity any faster than promised.