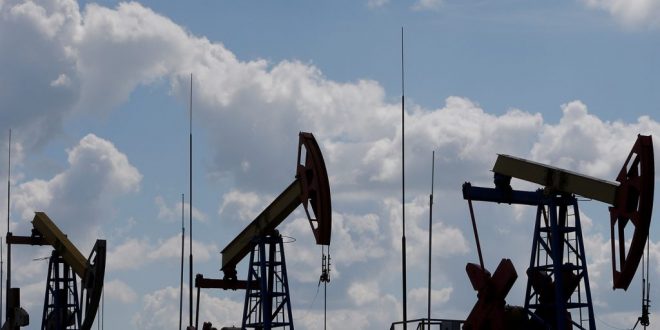 Oil Rises towards $50 after OPEC+ Deal

Oil extended gains toward $50 a barrel after OPEC+ reached a compromise deal to gradually taper production cuts, ending days of uncertainty after cracks emerged in the alliance earlier in the week.
Futures surged 1.9% in London after closing at the highest level in nine months on Thursday. The group will start adding 500,000 barrels a day of crude to the market in January, with ministers holding monthly meetings to decide on the next steps. The deal avoided a breakdown of OPEC+ unity after a tense split between Saudi Arabia and the United Arab Emirates.
The oil futures curve, meanwhile, is signaling tighter supply and a brighter long term outlook. The prompt timespread for global benchmark Brent crude moved further into backwardation, while the nearest December contract is trading at a higher level than the same contract for December 2022.
The OPEC+ deal — agreed after almost a week of fraught negotiations — offers something to those members concerned about the fragility of the market, and also to nations wanting to pump more to take advantage of higher prices. Oil has rallied recently on optimism fuel demand will start to rebound once Covid-19 vaccines are widely distributed.
“The market is happy there was a decision by OPEC+ to move cautiously and in small steps,” said Victor Shum, vice president of energy consulting at IHS Markit. “It sounds like a reasonable move given the uncertainty ahead. The enduring fact is that as oil prices rise, the willingness to restrain supply withers.”
Prior to the OPEC+ meeting, market watchers were expecting the alliance to delay the easing of planned output cuts by three months. Adjustments to the tapering can be in any direction, with a potential decision based on all factors, both negative and positive, Russian Deputy Prime Minister Alexander Novak said after the meeting on Thursday.
The deal will still allow for the oil market to remain in deficit throughout the first quarter of next year, according to TD Securities. There should be a steady and sustainable rally in prices through 2021 with OPEC+ exiting its production cuts in a coordinated way, Goldman Sachs Group Inc. said in a note.
“Energy markets are embracing OPEC+’s decision to ease up production cuts,” said Edward Moya, a senior market analyst at Oanda. “There’s uncertainty but also good reason to be optimistic for the demand outlook toward the later part of the first quarter.”
Adding to positive sentiment are signs that the U.S. may be closing in on new stimulus to boost the pandemic-hit economy ahead of a vaccine rollout. The global demand recovery is uneven, with the U.S. and Europe grappling with a resurgent coronavirus, while parts of Asia rebound strongly.