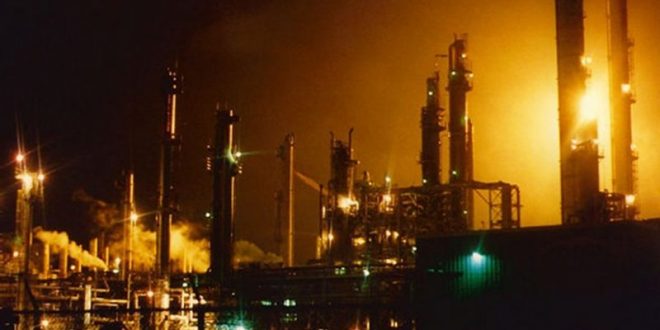 Oil Up on Inventory Fall, Protests in US

Oil prices were up on Thursday over a more-than-expected decline in US crude oil inventories and on clashes between supporters of US President Donald Trump and the police in the Capitol in Washington, Anadolu Agency reported.
International benchmark Brent crude was trading at US$54.80 per barrel at 0706 GMT for a 0.92 per cent rise after closing Wednesday at US$54.30 a barrel.
American benchmark West Texas Intermediate (WTI) traded at US$51.17 per barrel at the same time for a 1.07 per cent increase after it ended the previous session at US$50.63 a barrel.
A large drawdown in US crude oil inventories last week, typical of year-end activity, is driving prices up.
Commercial crude oil inventories in the US dropped by eight million barrels last week, relative to the market expectation of a 1.5 million-barrel draw.
Further fueling bullish oil prices, the turmoil in and around the US Capitol building had an instantaneous effect on global oil prices, enabling new record highs since late February 2020, when WTI reached US$52.02 and Brent increased to US$55.45 on Feb. 25 and 26, respectively.
On Wednesday, supporters of US President Donald Trump converged on Washington DC in protest of the results of the Nov 3 presidential election. As the electoral college votes were being tallied in the Capitol building, scores of protestors clashed with police, with some managing to enter the building. The demonstration turned violent and led to the death of four people.
A surprise production cut decision at the extended meeting of the Organization of Petroleum Exporting Countries (OPEC) and some non-OPEC producer countries on Tuesday also backed higher prices.
Saudi Arabia, the de-facto OPEC leader and major driver of OPEC+ production cuts, said it would voluntarily reduce its production in February and March by 1 million barrels per day (bpd).
The group announced that Russia and Kazakhstan will collectively increase their output by 75,000 bpd while the rest of the group will hold output steady.
In line with the decision taken at the December meeting, OPEC+ is currently cutting its output by 7.2 million bpd in January.
After Saudi Arabia’s voluntary reduction, the group’s production cut will be 8.125 million bpd in February and 8.05 million bpd in March, which also means OPEC+ will reduce its output in February by 925,000 bpd and 850,000 bpd in March relative to output rates in January.