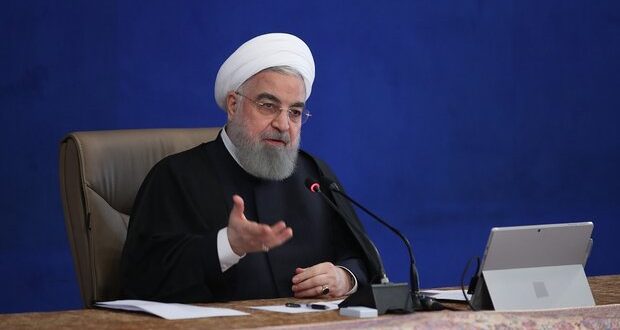 Iranian President Hassan Rouhani says returning to the nuclear deal commitments does not need negotiations but determination.
Speaking at a cabinet session on Wednesday, Rouhani pointed to the need for the JCPOA signatories to meet their obligations under the deal.
“Our returning to the commitments does not take time, it is just a matter of determination. How come did an illiterate trader sign a paper and said he has withdrawn from the JCPOA? Now the next person should bring a good paper and sign it. We just need a signature for returning to where we started,” he said, adding, “This does not take time and need any negotiation, lets both return [to the deal] – when I say both I also mean 4+1 not just America. If America comes, it will become 5+1.”
Tehran has reduced its commitments to the deal in response to other parties’ failure to fulfill their commitments, noting that all its steps in this path are reversible.
“We have always announced that our measures are reversible. There may come on stream 10,000 centrifuges and we can easily turn off all these centrifuges in one hour if we wish; so, this is reversible,” said the President.
“Whenever 5+1 or 4+1 fulfill their commitments, we will also do the same,” he stressed.
Iran oil sales in the next year
“We will produce and sell 2.3 million barrels of oil in (the Iranian calendar year) 1400 (which will start on March 21, 2021),” he said.
Next year’s budget has not been proposed based on possible negotiations, he said, noting that the basis of the budget is that the country’s economic conditions will be better in the next year.
The world should receive this message that Iran’s condition for producing and selling in the next year will be different from the past two years.
US blocking Iran’s efforts to buy COVID-19 vaccine
Elsewhere in his remarks, Rouhani pointed to the difficulties that the country faces for purchasing the COVID-19 vaccine due to unilateral US sanctions.
“People should know that we should curse Trump hundreds of times whenever we want to buy medicine, vaccine, or equipment. They have created so many problems that for a simple action, that would be done with a phone call or message or SWIFT, all the country gets involved to transfer money for buying medicine.”
Those who are taking their last breaths in the White House were so ‘evil’ that they did not show mercy to the Iranian people’s health, said Rouhani.
“We now want to purchase a vaccine. The money, determination, and order for doing so is ready but America is blocking it,” he said, noting that despite have money and resources in other countries and foreign banks, the United States is hampering efforts for using the resources for the purchase of medicine.