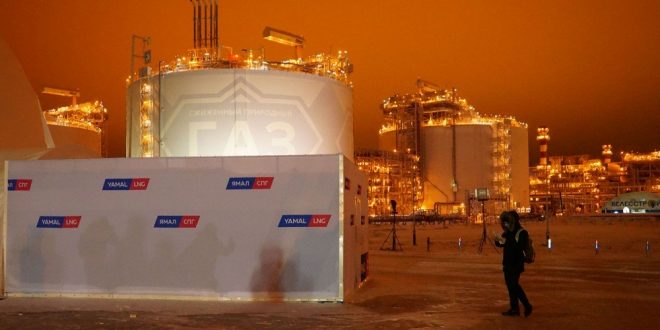 Russia still can reach its ambitious LNG expansion target despite the shift of focus to domestic technology, Novatek CEO Leonid Mikhelson said Friday.
The importance of LNG expansion intensifies with Russian piped gas exports to the EU facing a sharp reduction in the long term, Mikhelson told a briefing on the sidelines of the St. Petersburg International Economic Forum.
The EU plans to phase out Russian gas imports by 2027, in response to the Kremlin’s invasion of Ukraine in late February.
Ambitious Plans
Russia is keeping plans to export 120 million-140 million tons per year by 2035, Deputy Energy Minister Pavel Sorokin told the same forum. He admitted there could be some project delays, but said it was important that delays are not longer than one or two years. Last year, Russia produced around 30 million tons.
Russia can and must gain a 20% share of the global LNG market, Mikhelson agreed.
The target looks increasingly overambitious after the EU sanctions in April banned export and transit of key liquefaction equipment to Russian LNG projects.
Window of Opportunity
Russia needs to keep making LNG investment decisions despite the current geopolitical turmoil, according to Mikhelson.
The current high prices on the LNG market could result in an increased number of new LNG projects around the world, meaning that Russia risks missing the window of opportunity if it stops doing its own projects.
Domestic Technology
To keep LNG expansion on track, Russia needs to accelerate the development of domestic technology and equipment, including through bigger state support, Mikhelson said.
Russia doesn’t have a working domestic liquefaction technology for large LNG trains, but Novatek believes it can scale up its own Arctic Cascade technology, which now operates at the medium-sized 900,000 ton/yr Train 4 of its flagship Yamal LNG plant.
Novatek may take a final investment decision next year on an Arctic Cascade-based plant, which will have two trains with capacity of 2.5 million tons/yr each, Mikhelson said. Later, Novatek might scale the technology up further to a 6 million-7 million ton/yr one-train capacity, he added.
Arctic LNG 2
The proposed plant will be Novatek’s third project in the Arctic after Yamal LNG and Arctic LNG 2, which is now under construction.
The 19.8 million ton/yr Arctic LNG 2 faces difficulties due to international sanctions against Russia and the withdrawal of foreign investors, lenders and technology partners.
Key European contractors TechnipFMC and Saipem are reportedly poised to pull out of their engineering, procurement and construction roles in Arctic LNG 2.
Business daily Kommersant reported this week that Baker Hughes is also withdrawing from Arctic LNG 2 as well as from both operational large plants — Yamal LNG and Gazprom’s Sakhalin-2. Novatek did not comment.
Mikhelson said the first Arctic LNG 2 train is on track to be launched in 2023, although Novatek’s presentation shared at the forum had a more cautious timeline — 2023-24. A full ramp-up of the three-train plant is expected in 2026, the presentation said, although Novatek previously planned to launch the third train in 2025.
Tankers Problem
A contract for construction of three Arc7 ice-class tankers has been canceled by South Korean shipyard Daewoo Shipbuilding and Marine Engineering (DSME), but Mikhelson says the problem is now being solved.
DSME canceled the contract because of the sanctions imposed on Russian shipping company Sovcomflot, which ordered the tankers for future use within the Arctic LNG 2 project. The contract will be handed to another company, Mikhelson said, declining to name the company.
Japan’s Mitsui OSK Lines has a similar contract with DSME for three Arc7 tankers for Arctic LNG 2.
Another 15 Arc7 tankers for the project have been ordered at Russia’s Zvezda shipyard.