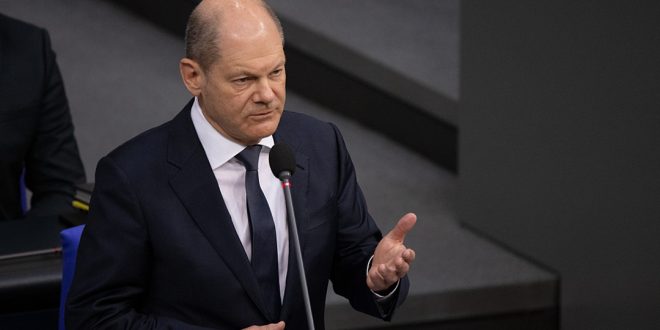 Olaf Scholz, Germany's chancellor, speaks at the Bundestag in Berlin, Germany, on Wednesday, April 6, 2022. Scholz reiterated his opposition to reversing Germany’s exit from nuclear power to help cut reliance on Russian energy, saying the technical challenges would be too great. Photographer: Liesa Johannssen-Koppitz/Bloomberg

German Chancellor Olaf Scholz on Thursday (11 August) promised a new package of measures, including tax relief, to help people struggling with rising energy bills as a result of a gas standoff with Russia.
“Citizens can count on us not to abandon them,” Scholz told journalists in Berlin.
An energy transition toward renewables is a top priority, and Germany will not slow its efforts to become independent of fossil fuels, he said at a summer news conference, an annual tradition introduced by his predecessor Angela Merkel.
Europe has plunged into an energy crisis as Russia cut gas flows following its invasion of Ukraine in February. Scholz’s government has introduced an energy levy to ease the strain for companies buckling under high gas prices and is combining that with relief measures for struggling households.
Asked whether rising prices could trigger social unrest, Scholz said: “No, I don’t think that we will see unrest in this country in this form, on the grounds that Germany is a welfare state… This welfare state has to take effect in this situation by way of saying that we will not leave anybody alone.”
Upholding European solidarity
The chancellor added that he plans to uphold European solidarity while tackling the upcoming energy crisis this winter.
“The European Union must handle these difficult times in solidarity, this is something I explicitly commit to,” Scholz said.
“I believe that, as the biggest country with the greatest economy and the largest population at the centre of Europe, we have a special task.”
Germany cannot play games against Brussels to please a domestic audience, also pledging his government’s defence for the independence of the European Central Bank.
Partners beyond G7
In terms of the G7 leading economies discussing a possible oil price cap, Scholz said such an initiative would need partners beyond the G7 to work.
As for a possible visit to China, while there were talks, no date has been set as of yet, he confirmed.
He stressed the importance of German companies not being too dependent on China but being able to rely on diversified supply chains.