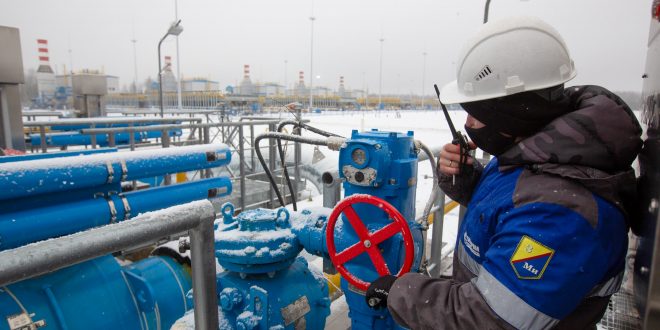 Study Says EU could Survive without Russian Gas next Winter

The European Union is capable of going through next winter without imports of Russian natural gas while avoiding serious damage to its economy, according to a new report by Belgium-based think tank Bruegel.
The 27-nation bloc would need to curtail its demand by at least 10%-15% should Russia halt imports altogether following its attack on Ukraine, a transit country for gas flowing to the EU, the researchers said.
If Russian export giant Gazprom PJSC continues to meet its long-term contractual obligations, Europe’s depleted storage could easily be replenished before the next heating season, the report showed.
The decision by President Vladimir Putin to invade Ukraine, the EU’s eastern neighbor, highlights the bloc’s dependence on gas imports from Russia and has triggered calls from some politicians and companies on banning those purchases. The risk of supply disruptions is set to be discussed by EU energy ministers at an emergency meeting in Brussels later on Monday.
“Russia’s invasion of Ukraine is a watershed moment for the EU, which will also redesign its energy map,” said Simone Tagliapietra, one of the authors of the report. “Our key message here is clear: if the EU is forced or willing to bear the cost, it should be doable to replace Russian gas already for next winter without economic activity being devastated.”
Gas Stockpiles
The biggest immediate challenge for the EU will be to replenish its depleted gas stocks. While the bloc can still boost imports of liquefied natural gas from countries such as the U.S., such purchases will be more expensive. And refilling storage to an average level will be a costly exercise: it could reach 70 billion euros ($78.2 billion) compared with 10 billion in previous years, according to Bruegel.
With prices forecast to stay elevated during the summer, when it’s usually cheaper to buy gas, companies will lack the incentive to rebuild reserves and will need risk-sharing tools from governments.
“There is a catch-22 situation,” said Georg Zachmann, who co-authored the Bruegel report. “To be prepared, we need to fill storages starting from now. But commercial operators might shy away from buying gas at current prices, as they must fear that Gazprom can at any moment cause prices to collapse by flooding the market.”
European gas prices have whipsawed within the last week, along with unfolding events in Ukraine and Western governments’ sanctions on Russia in response. Benchmark futures soared as much as 36% on Monday.
The crisis scenarios will require a lot of improvisation, Bruegel’s researchers said. To survive without Russian gas, the EU would have to revise dozens of regulations, quickly spend a lot of money and take hard decisions, accepting that in many cases it won’t have enough time for perfect solutions.
The report comes as the European Commission is drafting an action plan to boost the bloc’s energy resilience and reduce dependence on imported fossil fuels. The EU executive has stressed that the best remedy for Europe is to accelerate the implementation of the Green Deal, a sweeping strategy to shift to clean energy and reach climate neutrality by 2050.