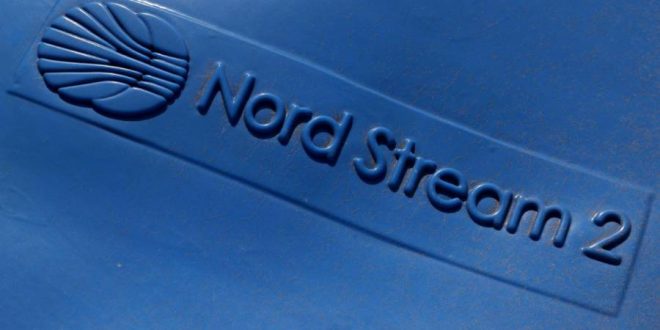 Russia can probably get around the latest U.S. sanctions against Nord Stream 2 and complete the pipeline, industry executives and analysts of the controversial project say.
Gazprom PJSC, which owns the project to boost natural gas flows from Russia into Germany, says it’s drawing up alternatives to complete work that was halted a year ago by U.S. sanctions. The Russian company also has options to overcome a new round of penalties that the Congress in Washington is due to approve within the next three weeks.
The 9.5 billion-euro ($11.2 billion) link under the Baltic Sea has become a major source of friction in the trans-Atlantic relationship, with President Donald Trump urging Europe part back its dependence on Russian energy supplies. German companies and Chancellor Angela Merkel are bridling against America’s interference, and the western companies set to reap rewards once gas starts flowing have vowed to move ahead.
“The pipeline company will restart pipe laying activities, and this pipeline will be finished,” said Rainer Seele, chief executive officer of OMV AG, the Austrian oil company that’s among the western backers of the link. “We are convinced this project is needed.”
Both Democrats and Republicans are pushing for legislation by the end of the year that would tighten sanctions against Nord Stream 2. President-elect Joe Biden has joined Trump in opposing Nord Stream 2, leaving little hope that his inauguration in January will defuse the issue.
That leaves Gazprom with three problems to resolve before it can move forward: finding a ship to do the work, obtaining insurance for the project, and getting certification that the work being done is safe and complies with European Union standards. Gazprom and Russia are working on all three fronts.
“All in all, it is still possible for Nord Stream 2 to be built by summer 2021 and get all the necessary certification to flow gas the following winter,” said Katja Yafimava, senior research fellow at the Oxford Institute for Energy Studies and one of Europe’s foremost authorities on pipeline politics.
Further sanctions probably will lengthen that timeline, but she expects Gazprom eventually will find solutions to each of the hurdles thrown up. The U.S., she says, “must realize it cannot stop it.”
There are signs Merkel’s government will help. Ministers in Berlin are coordinating a response with EU nations to the U.S. sanctions, and lawmakers joined industry groups in complaining that American officials are overstepping their authority. Germany’s BDI industry lobby has lashed out at U.S. intervention, saying it “will not only cause considerable economic damage, but will also undermine the sovereignty of Germany and the European Union.”
Just a few weeks away from completion, work stopped on the 1,230-kilometer (764-mile) pipeline last December when the U.S. targeted measures against companies working on the link. The Swiss company Allseas Group SA pulled a vessel it had laying the pipeline off the project with all except 160 kilometers already in place on the floor of the Baltic Sea.
The biggest question mark is whether Gazprom has found a ship to finish the work. Earlier this year, the company brought another vessel, the Akademik Cherskiy, into the region. It is currently traveling through the Baltic Sea after spending time in Mukran, a key logistics port on the Germany coast, Bloomberg ship-tracking data shows. It may be waiting for calm weather in the Spring to work again. Gazprom says it’s evaluating alternatives to finish the pipeline but won’t discuss its options — or the capabilities of the ship.
The next round of sanctions are aimed at preventing companies that access the U.S. financial system from writing insurance for Nord Stream 2. That would hit the primary insurer Zurich Insurance Group AG, according to people with knowledge of the pipeline’s arrangements on that matter. Zurich Insurance said it never comments on specific customers and that it would comply with any regulations that apply.
Because of the size of the project, it will probably require a reinsurer to help underwrite the costs. The sanctions may force Nord Stream 2 to source all those services in Russia, perhaps from state-backed entities. One possible solution is the Russian National Reinsurance Co., or RNRC, which was created by Moscow to deal with sanctions risks. There’s no restriction on the nationality of the company writing insurance for the project.
“Russia several years ago took care of creating additional domestic capacities for insurance and reinsurance of sanctioned risks, the risks that cannot be ceded to the international markets,” said Anastasia Litvinova, director for EMEA insurance at Fitch Ratings. She declined to comment on specific proposals against Nord Stream 2.
Certification is another issue that will take time to solve. Det Norske Veritas Holding AS, the Norwegian company verifying the pipeline’s safety and integrity, said it’s scaling back work for Nord Stream 2 ahead of the decision on sanctions. Denmark’s energy agency says Nord Stream 2 can hire any third party to fulfill legislation, which could allow a Russian company to step in.
Yafimava says Gazprom probably needs to find a state-owned entity to do certification if the U.S. sanctions extend to that part of the business, “which is not impossible, but it takes time.”
So far, none of Nord Stream 2’s financial backers have pulled out despite escalating anger from the U.S. OMV along with Royal Dutch Shell Plc, Uniper SE, Engie SA and Wintershall AG helped finance the project. Engie’s Chief Financial Officer Judith Hartmann said he’s “still hopeful” that Nord Stream 2 will be completed.