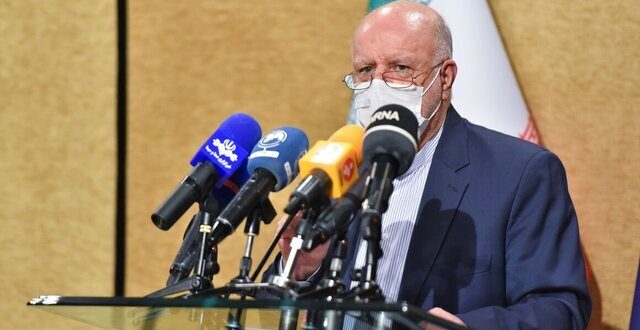 Bijan Namdar Zanganeh, Iran’s oil minister, said on Friday that the Islamic Republic did not allow the Trump administration to decrease Iranian oil export to zero.
In separate remarks on Thursday, Zanganeh also said, “Trump thought we die due to the sanctions, but we did not, they are knocked down.”
Addressing the inaugural ceremony of the 25th Oil, Gas, Refining and Petrochemical Exhibition on Friday, Zanganeh commemorated Iranian martyrs, noting that the enemies, especially the U.S., were trying to reduce Iran’s crude oil export to zero, but their attempt ended in failure.
After Trump’s administration withdrew from the JCPOA, the U.S imposed severe oil sanctions on Iran to ban the main purchasers of Iran’s oil from importing crude from the country. Nevertheless, Iran succeeded in manufacturing catalysts and chemical substances, Zanganeh stated.
The minister stated that Iran could hit the highest and historical record in exporting oil products, noting that the country is alive and it will continue the path with more hope than before and new investment is the main stimulus to improve the Iranian market.
He stressed the need to hold the exhibition in order to preserve the link between producers and consumers, adding that the motto of the fair is support for Iranian goods and services.
According to Zanganeh, the Oil Ministry has allotted 500 million dollars to support knowledge-based companies active in the development of oil industry.
The ministry will purchase equipment made by Iranian companies in order to uphold domestic innovation, he added.
The 25th Oil, Gas, Refining and Petrochemical Exhibition is being held with the participation of 550 domestic firms, 15 universities, 52 startup companies and 27 firms of the Innovation and Prosperity Fund. The exhibition runs from January 22 to 25 in Tehran.