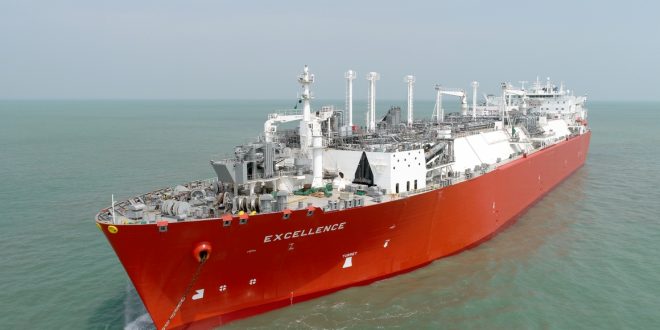 Turkey ranked third in the world after China and India with an annual growth of 1.3 million tonnes in LNG imports in 2020, according to the latest report of the International Group of Liquefied Natural Gas Importers (GIIGNL).
China ranked first with imports of 7.2 million tonnes last year followed by India with 2.6 million tonnes.
The report also showed that Turkey became the fourth-largest LNG importer in Europe.
Turkey was followed by Taiwan with an increase of 1.1 million tonnes, South Korea with an increase of 700 thousand tonnes, and Thailand with an increase of 600 thousand tonnes.
Mexico and France were the countries that decreased LNG imports the most.
Turkey imported a total of 10.72 million tonnes of LNG last year: 3.96 million tonnes of LNG were imported from Algeria and 1.32 million tonnes from Nigeria. Equatorial Guinea, Angola, Cameroon, Norway, Egypt, the US and Trinidad and Tobago also supplied LNG to Turkey.
According to the report, 2020 was a year of two halves for Europe’s LNG imports.
“During the first half, the region acted as a market of last resort. During the second half, Europe recorded a decrease in LNG imports compared to the previous year due to a decrease in demand for natural gas because of lockdowns, while storages filled up and US cargoes were canceled,” it said.
It was noted that the greatest declines in net LNG imports were seen in France by 16.1% and Belgium by 36.9%.
However, Turkey recorded the highest increase at 14.4% by 1.35 million tonnes, the report showed.
Turkey’s LNG policy
Wishing to diversify its energy resources, Turkey has focused on the use of domestic and renewable resources in recent years. The country, which diversifies LNG resources to avoid supply problems and natural gas interruptions, purchases high volumes of LNG and piped gas.
These purchases are stored at the country’s two onshore LNG import terminals – the Marmara Ereglisi (BOTAŞ) LNG Terminal with an annual capacity of 5.9 million tons and the Egegaz LNG terminal with an annual capacity of 4.4 million tons.
A private sector FSRU (floating LNG storage and regasification vessel) is also used off Izmir’s Aliaga region.
The country’s first FSRU, Ertugrul Gazi, arrived in Turkey on April 22. Commissioning of the vessel is expected soon off Dortyol in the Hatay province.
To further enhance Turkey’s LNG capacity, infrastructure adaptations are underway at the Aliaga LNG import terminal to handle small-scale LNG vessels.
The works are scheduled for completion by the end of the year.
“In October 2020, BOTAŞ awarded a tender to Unitek Insaat for the construction of a jetty, measuring station and transit pipeline for a new offshore LNG import terminal in the Gulf of Saros in northwest Turkey. An FSRU is under construction in South Korea,” it explained.