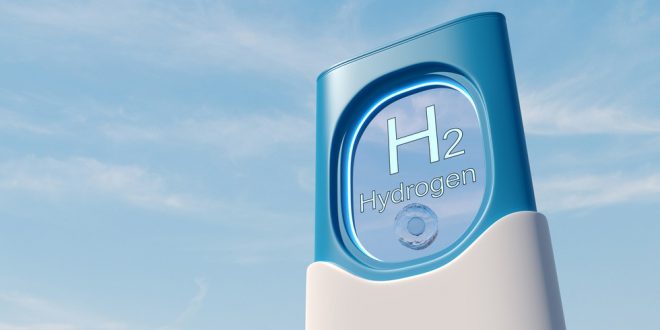 The UAE is seeking a leadership position in blue hydrogen as it looks to achieve self-sufficiency in natural gas and tap the growing market for low-carbon fuel.
The managing director and group chief executive of Abu Dhabi National Oil Company addressed a Gastech industry event on Tuesday, in Dubai.
“Already at Adnoc, we produce about 300,000 tonnes of hydrogen a year,” Dr Sultan Al Jaber said. “By leveraging our existing gas infrastructure and commercial-scale CCUS [carbon capture utilisation and storage] capabilities, the UAE can and will become a major player in the emerging blue hydrogen market.
Carbon capture and sequestration refers to the procurement and storage of carbon dioxide from steam methane reformation that is used to produce blue hydrogen. The CO2 is used in other industrial processes, including in the oil and gas sector where it is pumped into mature oil wells to boost crude output.
“As the world consolidates its recovery from the Covid-19 pandemic, LNG [liqufied natural gas] and broader gas markets globally are tightening, with demand outpacing supply. Longer-term, the outlook is also robust, driven particularly by markets in Asia,” Dr Al Jaber said.
The UAE consumes around 7.4 billion cubic feet (cf) of gas per day largely to meet power demand, with the total share of imported fuel at 30 per cent, energy consultancy FGE estimated.
Abu Dhabi is prioritising the development of gas from unconventional reserves, which are deposits that were earlier considered commercially unviable to exploit.
The UAE accounts for about 4 per cent of global oil production, with the bulk of the output from fields owned and managed by Adnoc.
The company announced the discovery of additional reserves of 7 billion “stock tank” barrels of oil, 58 trillion cf of conventional gas and 160tn cf of unconventional gas in 2019.
This pushed the UAE up the rankings in terms of hydrocarbon reserves, data from the US Energy Information Administration showed.
Last year, the UAE also announced a discovery of 80tn cf of shallow gas reserves in an area between Abu Dhabi and Dubai – the biggest discovery in 15 years.
“Today, gas provides almost one quarter of the world’s energy supply and will continue to play a critical role in the global energy system,” said Dr Al Jaber, who is also the UAE Minister of Industry and Advanced Technology.
“No other fuel source can reliably supply the baseload power to heat and cool homes, drive heavy industry and expand economies, all while keeping emissions at a minimum.”
His comments come amid record prices for gas, which have increased by 36 per cent over the last month.
Gas is expected to continue to trade higher for the rest of the year as the Northern Hemisphere enters its winter.
Colder-than-expected weather could drive up requirements for heating and inflate prices.