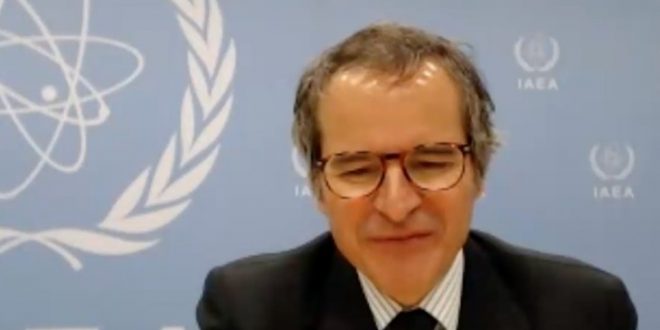 The head of the U.N.’s atomic watchdog plans to visit Iran before the end of next month amid questions about whether Iran will return to negotiations.
International Atomic Energy Agency chief Rafael Grossi said Tuesday he intends to visit Tehran “soon” to discuss and hopefully resolve specific concerns about Iran’s nuclear program.
On a visit to Washington, Grossi told reporters that he expects to go to Iran before the next meeting of the IAEA board of governors in late November.
Grossi, who met on Monday with Secretary of State Antony Blinken, would not predict whether the IAEA board would take such action, saying it will likely depend on what Iran does in the meantime.
“I think it will all depend on what happens from now to the third week of November. So many things will happen,” Grossi said, referring to his upcoming visit and the potential for resumption in the nuclear talks, which have been stalled since June.
After Grossi’s last visit to Tehran in September, Iran had agreed to allow IAEA inspectors to install new memory cards in the cameras in question but the method and timing of the move have yet to be settled.
At the time, Grossi called the agreement a “stopgap” measure that must be enhanced. The IAEA has said its activities have been “seriously undermined” since February by Iran’s refusal to let inspectors access their monitoring equipment.