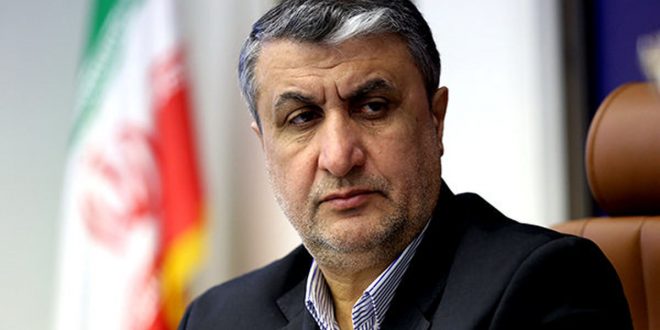 The head of Atomic Energy Organization of Iran (AEOI) has said that the Vienna talks are on return of the US to the July 2015 nuclear deal and that the United States has to lift all sanctions.
Removal of the sanctions has to be practical and have the possibility to be verified, Mohammad Eslami said while speaking to IRNA.
About the outcomes of the recent visit of International Atomic Energy Agency (IAEA) Director General Rafael Grossi to Tehran, the AEOI chief said “our issues” with the IAEA were completely routine and will continue.
Talks between Iran and 4+1 on removal of the sanctions have started in the Austrian capital as of November 29.
Ali Bagheri Kani leads the Iranian delegation in the fresh talks.
About the first day of talks, Bagheri Kani said Iran stressed that the main factor in creating the current condition is the US which has withdrawn unilaterally from the July 2015 deal, violated UN Security Council resolution, and re-imposed the past sanctions, which was a violation of the international regulations.
United States withdrew unilaterally from the international nuclear deal, aka Joint Comprehensive Plan of Action (JCPOA), re-imposed the past sanctions and imposed as it claimed the highest level of sanctions against Iran in November 2018.
During the November talks in Vienna, it was set that the issue of removal of the sanctions would be put on agenda of the Joint Commission of the JCPOA, Bagheri Kani noted.
It was also set that a working group would start work as of November 30, 2021 to review the issue of lifting of the unfair and illegitimate sanctions against Iranian nation, the nuclear negotiator added.
And that the countries of 4+1 have accepted Iran’s legitimate demand is a significant achievement, he underlined.
First, the situation of the illegal sanctions has to be determined then other issues would be discussed.