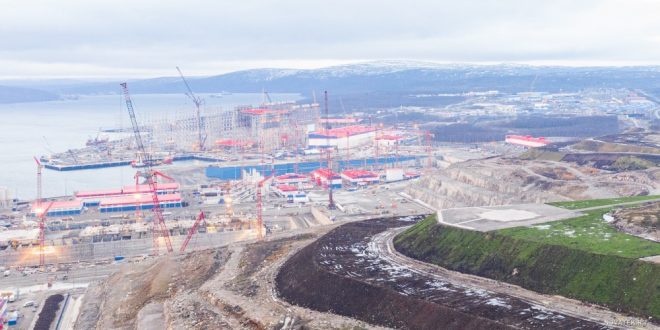 A variety of buildings, facilities, and dock make up a new skyline like the Russian north has never seen before. Once a sleepy village, the Belokamenka (Russian for “the White stone”) is nowadays the busiest industrial construction site anywhere in the circumpolar north.
Over 100 companies are involved in creating what will be the LNG Construction Center, operated by Russian private natural gas producer Novatek.
Although far from completed, work on fabricating the gravity-based structure for the liquefaction facility for Train 1 as part of Arctic LNG 2 project has already started in the main dock. The giant modular structures with the high-tech factories will, when ready, be towed from Belokamenka across the Barents- and Kara Seas to the coast of the Gydan Peninsula in Ob Bay in Siberia.
Here, the production of liquified natural gas (LNG) will start in 2023. A year later, in 2024, Train 2 will start production, while the final Train 3 is set to start operation in 2026.
Each of the three trains will have a production capacity of 6,6 million tons per year. The gas supply to the plants comes from Novatek’s Geofizicheskoye and Salmanovskoye fields.
Additional to Novatek’s 60% share, the Arctic LNG 2 production facilities are owned by Total (10%), China National Petroleum Corporation (10%), China National Offshore Oil Corporation (10%), Mitsui Group (5%) and Jogmec (5%).
However, to compare the scale it is just to look across the Kola Bay where Russia’s powerful military Northern Fleet has its main base Severomorsk. While the harbor on the waterfront in Severomorsk is 1,5 km in length, the waterfront of the new yard in Belokamenka is 2,7 km.
The entire construction site covers more than 4 square kilometers.
The tallest shiphall is 88 meters high. That is 16 meters taller than what until now has been the highest building on the Kola Peninsula; the 19-floors Hotel Arktika in Murmansk.
After completing the 3rd train for the Arctic LNG 2 project by 2026, new plans are sailing up.
In March, Prime Minister Mikhail Mishustin signed a new LNG development plan for Russia listing potential projects in the Barents Sea and Siberia.
Russia intends to boost its annual LNG production to 140 million tons by 2035, an almost five-time increase compared with 2020. It could make the country a world leader in the field.
Novatek started production at its first Yamal LNG plant in Sabetta in December 2017.