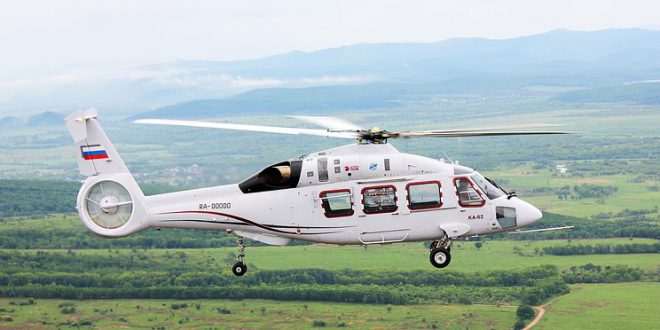 Use of Ka-62 Helicopter for Arctic Projects

Russian Helicopters Group is discussing with oil and gas companies the prospect of using the most advanced Kamov Ka-62 helicopter for works on the Arctic shelf. Russian Helicopters CEO Andrei Boginsky said at the HeliRussia-2017 helicopter industry exhibition on Friday.
Today we see its prospects primarily for works on [the Arctic] shelf. And today we are already working with our oil and gas companies – colleagues from Gazprom. Gazpromneft and Rosneft. discussing the requirements for our model range for work over the water surface. the chief executive said.
The flight model of Russia’s most advanced Ka-62 helicopter performed its first trial flight over the site of Progress Arsenyev Aviation Company. part of Russian Helicopters Group. on Thursday.
The flight lasted 15 minutes and showed that all of the helicopter’s necessary adjustments had been successfully completed. the Russian Helicopters press office reported.
The test pilots of the Ka-62’s main developer (the Kamov Company) assessed the helicopter’s overall performance capacity and checked the operation of its basic power supply systems. onboard equipment and the engine unit.
Specifically. the test pilots checked the helicopter’s stability and controllability and the operability of its basic systems and complexes.
The Ka-62 performed the 15-minute flight around a circle at a speed of 110 km hr.
The Ka-62 flight model got off the ground for the first time in April this year to assess its general operability and check the operation of its basic power supply systems and onboard equipment.
The Ka-62 is designated to transport passengers. carry out rescue operations and also works in the oil and gas sector. The helicopter’s high power-to-weight ratio offers a wide range of altitudes for its operation. The Ka-62 can be used in a hot climate and it can perform flights above the sea.
Russia’s Industry and Trade Ministry plans to sell 365 cutting-edge Ka-62 helicopters by 2030. the ministry’s press office reported on Friday.