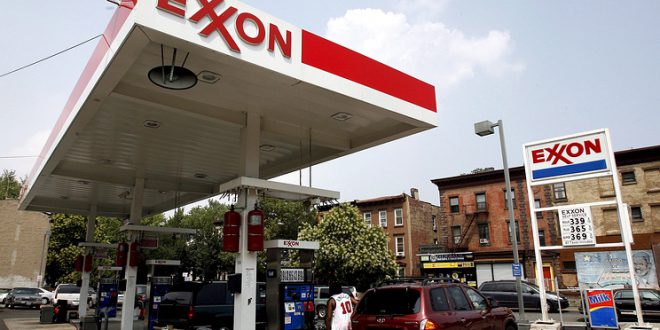 Key Facts about ExxonMobil and Its Business in Russia

On July 20. US Treasury Department has fined US oil and gas corporation ExxonMobil $2 mln. According to the department. the management of the company’s subsidiaries violated the anti-Russian sanctions in May 2014 when they and head of Russian state oil company Rosneft Igor Sechin signed eight documents `related to oil and gas projects in Russia.`
ExxonMobil Corporation was established on November 30. 1999 by the merger of Exxon and Mobil. The history of both companies goes back to US oil monopoly Standard Oil. which was founded in 1870 by John Rockefeller. In 1911. by the order of the US Congress the monopoly was split into seven firms.
Currently. ExxonMobil is the world’s largest private company engaged in oil and gas production and processing. It conducts exploration and production in 39 countries and processing – in 14 countries. The corporation’s main resource bases are located in the US. the Gulf of Mexico. the North Sea and in Western Africa.
Projects in Russia
The corporation began to cooperate with Russia in 1992 when Mobil entered the Caspian Pipeline Consortium (CPC). which was established to supply oil from the Tengiz field (Kazakhstan) to the port of Novorossiisk at the Black Sea. The share of ExxonMobil in CPC is 7.5%.
Since 1995. ExxonMobil has participated in development of oil and gas fields in the offshore zone of the Sakhalin island (Chayvo. Odoptu and Arkutun-Dagi) – Sakhalin-1. ExxonMobil’s subsidiary – Exxon Neftegaz Limited is the project’s operator. The corporation holds 30% in the project. In 2016. the production within that project totaled 49.000 barrels of oil per day and 1.5 mln cubic meters a day.
In August 2011. ExxonMobil and Russian largest oil producer Rosneft signed an agreement on a strategic partnership in the Arctic offshore zone of Russia.
On April 16. 2012. it was specified by a package of documents signed by the president of Rosneft Eduard Khudainatov and ExxonMobil`s head Rex Tillerson (currently US Secretary of State) in the presence of Vladimir Putin (then Prime Minister). The companies agreed to set up two joint operators to develop deposits in the Kara and Black Seas. Later. it was supplemented by an agreement on the joint development of hard-to-recover reserves in Western Siberia.
In March 2013. Neftegaz America Shelf. a subsidiary of Rosneft. acquired a 30% stake in the 20 deep-water blocks of ExxonMobil in the Gulf of Mexico for geological exploration. In June 2013. Rosneft and ExxonMobil signed an agreement to set up a liquefied gas plant on Sakhalin (the Far Eastern LNG project).
In May 2014. as part of the St. Petersburg International Economic Forum. ExxonMobil and Rosneft signed several more documents. in particular. to extend the term of the agreement on the Far Eastern LNG project.
In mid-August 2014. Rosneft and ExxonMobil. as part of the joint venture Karmorneftegaz. began drilling the northernmost well in Russia – Universitetskaya – using the West Alpha platform.
In September 2014. the US introduced sectoral sanctions against Russia. implying. in particular. a ban on cooperation with Russian companies in the field of promising deep-sea. Arctic and shale projects. As a result. Rosneft and ExxonMobil were forced to suspend joint drilling and the implementation of all projects under the 2011 agreement. The joint project to develop the offshore zone of the Gulf of Mexico was closed in 2016.
Figures
ExxonMobil`s oil production in 2016 totaled 2.365.000 barrels per day (of which the US share was 494.000 barrels. 21%). which is up 0.8% year-on-year. Daily gas production was 286 million cubic meters (the share of the USA is 87 million cubic meters. 30%). which is 3.7% down year-on-year.
In 2016. ExxonMobil`s refining amounted to 4.268.000 barrels per day (a decrease of 3.7%).
The corporation`s revenues in 2016 totaled $218.6 bln (a decrease of 16% year-on-year). net profit dropped 2.2 times to $7.84 bln.
As of mid-July 2017. market capitalization was $343 bln. The number of employees is 71.100 people.
Management. owners
In 2017. Darren Woods replaced Rex Tillerson as Chairman of the Board of Directors and Chief Executive Officer of the corporation.
Practically all shares of the corporation are in free float. The largest owners are: Vanguard Group and its investment funds – 12%. Blackrock investment company – 5.9% and State Street Corporation – 5.1%.