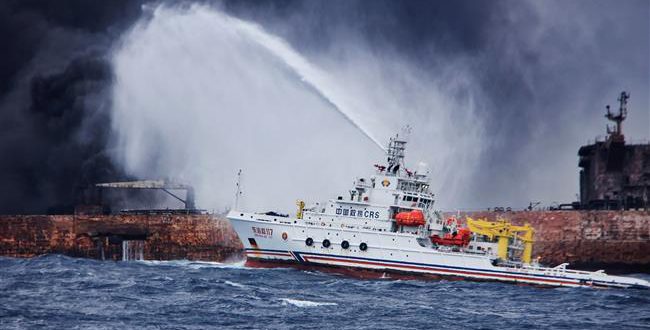 There is no hope for finding the missing crew of the Iranian tanker alive. spokesman for the special committee on following up the situation of the Jan 6 collision incident announced here on Sunday.

`The Iranian seamen had unfortunately been killed due to poison gas and the size of the fire which embraced the tanker since the outset of the collision between the Iranian tanker and a Chinese freighter in East China coast on Jan 6.` Mohammad Rastad said.

He said his conclusion is based on the latest review of the collision and the remarks made by the 21-member crew of the Chinese freight ship who were rescued after the Saturday night incident.

Due to the vast size of the blaze. the bodies of the Sanchi tanker crew may not be found anymore. The tanker was operated by the Iranian Tanker Company (NITC).

Rastad went on to say that the efforts to tame the fire in order to enter the tanker remained unsuccessful due to consecutive explosions occurred after the blaze.

An Iranian tanker carrying condensates collided with a Chinese freight ship in East China coast on Saturday night (Jan 6). and the 32 members of the crew went missing. Three bodies were found. according to Iran`s officials. Two of the crew members were Bangladeshi.

On Jan 10. Iran`s Consul General in China`s Shanghai Port Alireza Irvash announced that the operation to put out the fire of the Iranian tanker began on Wednesday while flames of fire subsided despite bad weather in the region.