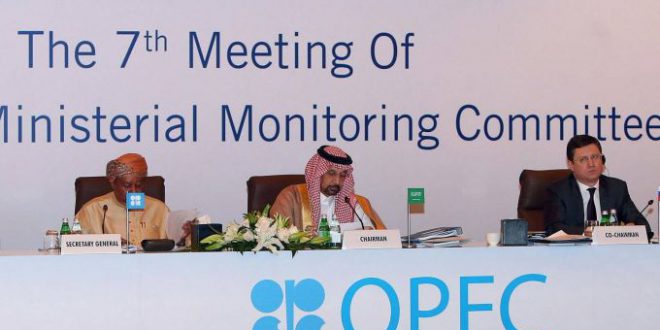 The pledge Saudi Arabia and Russia made to keep working together on managing the oil market beyond 2018 shows the two energy giants are now looking to engineer an orderly exit from the deal and avoid crashing the prices they`ve worked so hard to revive.

`Keeping some level of production cuts into 2019 is the kind of thing that makes sense.` said Robin Mills. chief executive officer of Dubai-based consultants Qamar Energy.

`Just abandoning the deal at the end of 2018 would put a lot of oil back on the market.`

Russia is prepared to continue cooperating with the Organization of the Petroleum Exporting Countries (OPEC) even after the cuts expire. Energy Minister Alexander Novak said in a joint interview with his Saudi counterpart in Oman on Sunday. Saudi minister Khalid Al-Falih said continuing curbs at a different level was one possibility under consideration.

Mirroring the way central banks have looked to manage their exit from years of loose monetary policy. OPECand its allies want to demonstrate they have a range of options open after the current deal expires at the end of the year. There are also reasons to be cautious about the current run-up in oil prices close to US$70 a barrel. analysts said. Brent crude gained 0.5 per cent to trade at US$69.38 a barrel at 1.36pm in Singapore.

`We are at price levels where we can see an impact on demand and we have the risk of more shale coming` from rival producers in the US. said Olivier Jakob. managing director at Petromatrix GmbH in Zug. Switzerland.

`That raises the likelihood the cuts would have to go on longer.`

Excess oil inventories have declined by 220 million barrels from a level of 340 million barrels in early 2017. according to Mr Al-Falih. who said he`s uncertain the pace of drawdowns will continue in coming months.

Both Saudi Arabia and Russia stand to gain if production cuts. albeit at a lower level. extend into 2019. Qamar`s Mr Mills said. They`re able to boost output quickly once curbs end. while some producers such as Venezuela or Algeria are more limited when it comes to reviving supply. he said.

That`s not to say the two biggest producers won`t face resistance at home. Russian oil companies have already lobbied for restrictions to be eased. while Saudi Arabia needs economic growth as it readies a public listing for state oil giant Aramco.

`If they have buyers knocking on their door and asking for more oil. that`s going to test the extent of that cooperation and that resolve. but certainly they are aiming to build the foundations for a much longer period of cooperation.` said Richard Mallinson. an analyst at Energy Aspects in London.

OPEC and its partners see merit in maintaining their curbs into 2019. Oman`s Oil Minister Mohammed Al Rumhy said before Sunday`s meeting. Meanwhile. Iraqi Oil Minister Jabbar Al-Luaibi said global inventories are falling and the market will be stable by the end of 2018.

While OPECstrategy for 2019 is not yet clear. the resilience of the Saudi-Russian relationship seems rooted for now. For those in the market who assumed Russia would jump ship long ago in search of higher revenue. the endurance of the alliance is no little surprise.