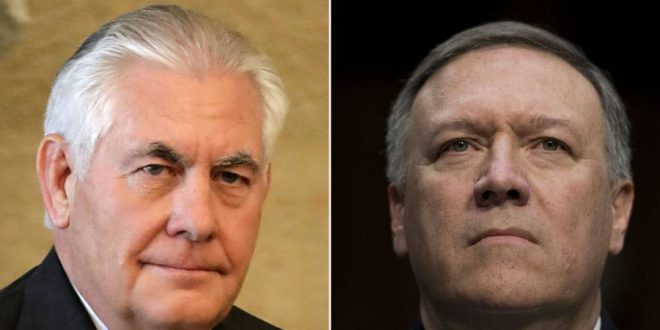 President Donald Trump on Tuesday fired US Secretary of State Rex Tillerson. saying the two had a `different mindset` on key diplomatic issues and `we disagreed on things` including the international nuclear accord with Iran. Here are some issues on which Tillerson. former chief executive officer at Exxon Mobil Corp. differed with Trump.

Tillerson encouraged Trump to maintain the international nuclear deal with Iran reached during Democratic former President Barack Obama`s administration. The 2015 deal gave Iran billions of dollars in sanctions relief in return for curbs on its nuclear program. Trump on Tuesday told reporters. `When you look at the Iran deal. I think it`s terrible. I guess he thinks it was OK. I wanted to break it or do something. and he felt a little bit differently. So we were not thinking the same.`

Trump last year used bellicose rhetoric toward North Korea and threatened `fire and fury.` ratcheting up tensions with the reclusive nuclear-armed country. At that time. Tillerson championed diplomacy. a path the president publicly derided. The confrontation centred on US concerns over North Korea`s nuclear arms and missile programs. A day after Tillerson said `lines of communications` remained with Pyongyang. Trump mocked him.

After British Prime Minister Theresa May said on Monday it was `highly likely` that Moscow was responsible for the poisoning in England of Russian former double agent Sergei Skripal. White House spokeswoman Sarah Sanders pointedly declined during a news briefing to blame Russia for the incident. Hours later. Tillerson issued a statement saying the United States had `full confidence` in Britain`s assessment about Russia`s culpability. On Tuesday. Trump equivocated on Russia`s role.

In June 2017. Tillerson called on Saudi Arabia. the United Arab Emirates. Bahrain and Egypt to ease their blockade against Qatar. a US ally that hosts an American military air base that those countries accused of backing Iran and Islamist extremists. Tillerson was undercut by Trump. who called Qatar `a funder of terrorism at a very high level.“

Tillerson supported staying in the international accord reached in Paris in 2015. a deal in which Obama had played a key role. Trump in June 2017 announced he would take the United States out of the pact. following his nationalist `America First` instincts and siding with skeptics of climate change.

A media report in October that Tillerson had openly criticized Trump and referred to him as a `moron` during in a session with the president`s national security team and Cabinet officials at the Pentagon further alienated Tillerson from Trump.