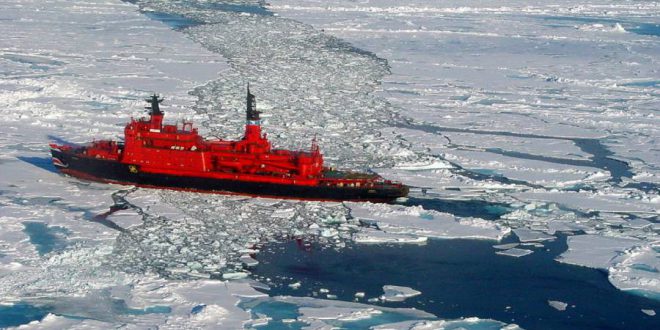 Russia and China are on the cusp of making a deal to pursue “very big“ infrastructure projects that would help bring natural gas out of the Arctic. according to a top Russian diplomat.

“Almost everything has been completed so far. but there is only one gap. which is the price.“ said Andrey Denisov. Russia`s ambassador to China. “Price is the final detail but a crucial one. and it’s quite natural in the discussion between seller and buyer — the seller wants the price as high as possible but the buyer wants to pay as little as possible.“

The partnership is expected to involve Chinese and Russian entities working together to expand Arctic navigation. Russia will get China`s help in developing new shipping routes in exchange for fuel supplies.

“China as a buyer needs gas and a reliable long-term source. Russia is definitely that kind of source.“ Denisov said in a South China Morning Post interview published Thursday.

“The northern sea route is very effective in terms of distance. but the weak point is the lack of navigation operating facilities.“ Denisov said. “We need to equip all the shoreline with special devices which can indicate how strong the ice is and other natural conditions.“

“We need icebreakers. Russia is a unique country which possesses quite a number of icebreakers and has a very well-calculated and proven program for the construction of new icebreakers in recent years.“ said Denisov. who is fluent in Chinese and English. “China has experience in building icebreakers and passing through the route too.“

Denisov`s preview of the economic partnership comes just days after China and Russia agreed at the International Arctic Forum in St. Petersburg to establish an Arctic Research Center to launch “joint Arctic expeditions“ and other projects.

U.S. officials expect China to try to compete militarily in the Arctic. raising the possibility of new controversies over sovereignty in the region.

“It’s nobody`s lake.“ Adm. James Foggo. commander of U.S. Naval Forces Europe and Africa and Joint Forces Command Naples. told reporters in February. “It should have free and fair access to. certainly. all the Arctic Council nations — of which we are a member.“

China is not a member of that council. but Russia is. “For China. Russia is a means to fulfilling economic. political. and military goals in the Arctic region and beyond.“ Rebecca Pincus. a U.S. Naval War College professor. said at a congressional hearing last month. `Russia sees in China the capital and markets needed to fill the void created by U.S. E.U. sanctions. and to fund the development Russia needs to regain great power status. However. the constant fear of falling under Beijing’s influence serves as a check on Moscow’s enthusiasm and drives efforts to diversify partners.“

The two nations signed an agreement April 10 to create the China-Russia Arctic Research Center. a scientific platform that Chinese officials hope will pave the “Polar Silk Road“ through the region. `The newly established center will take China-Russia scientific cooperation to a new level.` Aleksey Sokov. acting director of Russia’s Institute of Oceanology. said Thursday. “Jointly we will be able to initiate and implement major projects. including joint Arctic expeditions. to foster innovative dialogue as related to exploration of ocean mineral and biological resources to preserve unique subsea ecological systems.`

Previous The Second Week of April 2019
Next Saudi. Russia Oil Cooperation Is Set to Continue