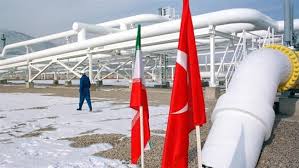 Routine pumping of Iranian gas to Turkey is underway. spokesman of the National Iranian Gas Company (NIGC) Majid Boujarzadeh said.
He said that national gas supply networks are running well including the northern provinces.
Despite cut-off of gas supply to Iran by the Turkmen National Oil and Gas Company. supply of gas to the northern provinces is satisfactory. he added.
He said that Iran is bound to the international agreements and export of gas to Turkey and that gas swap from Turkmenistan to Azerbaijan Republic continues routinely.
Boujarzadeh said that NIGC gave priority to the household consumption of the national networks and that NIGC pumps 430 million cubic meters gas to the national household networks.
He said that the power plants consume 120 million cubic meters gas and the industries consume 80 million cubic meters gas.
Supply of gas for petrochemical complexes is also satisfactory. he said.
He noted that 46.5 million cubic meters of gas is being pumped to the petrochemical units.
In case of the swap of Turkmen gas to Azerbaijan Republic. he explained that Iran has been always bound to its international obligations and the gas swap continues.
The National Iranian Gas Company in a statement released on Sunday evening said that the gas needed for the Iranian northern provinces will be supplied from the domestic resources.
A day earlier. Deputy Petroleum Minister and Managing Director of National Iranian Gas Company (NIGC) Hamid-Reza Araqi said Iranian contract with Turkmen Gas is in place for the next five years.
Explaining outcome of his 3-day visit to Turkmenistan and negotiations with Turkmenistan Vice-President. Energy Minister. Foreign Minister and Managing Director of Turkmen Gas Company. Araqi said that a Memorandum of Understanding (MoU) on gas import to Iran. swap and drawing up strategy for cooperation of the two companies were the topics of negotiations.
The two parties agreed to set up a joint committee to review cases of differences in the next two months for settlement. Araqi said.