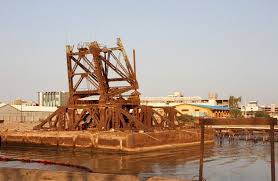 Iran has opened its first oil industry museum in the southwestern city of Abadan.
The museum is Iran`s oldest gas station that was established in Abadan in 1927 by British Petroleum.
At that time it provided oil and gasoline for household and transportation sectors. It also served airplanes.
Petroleum industry museums in Abadan are to be launched in five spots in this city. namely. Abadan gas station. technical-vocational school. Abadan historical jetty. power plant number 1 and luxury houses. said Director of Petroleum Museums Akbar Nematollahi upon opening of the museum Tuesday.
He has also said that Abadan Petroleum Museum Park and luxury houses would be ready by March next year.
20 spots have been selected to house petroleum industry museums in Abadan. Of these 20 spots. five are prioritized for the first phase. Studies and necessary construction operations have started by contractors and consultants. said Nematollahi.
After restoration. the gas station has turned into a museum.
In the main building of the museum of Abadan gas station. all documents and objects related to petrol station like pumps. scales. jerry cans and other tools and documents are put on display to explain how gasoline was distributed in the past. The building was operational until 40 years ago before being disused.
Two more buildings are also considered to exhibit all documents related to oil products` distribution in the country and also provide welfare services to visitors. said the official.
The jetty will be the main part of petroleum museums in Abadan. The central building of petroleum museums is located on a piece of land measuring 6.000 square meters. said Nematollahi. He added that the export jetty where two cranes have been installed is a good place for museum.
One of the cranes still there was instrumental during World War II as it served the Allied forces. During the Iraqi imposed war on Iran. it was targeted and submerged. The crane was finally taken out in 1994 by a group of Abadan refinery staff.
Transforming all old and historical places of the refinery. like oil storage tanks and foundry. into museums are on the agenda for future. said Nematollahi.
There are over 200 oil museums in the world.