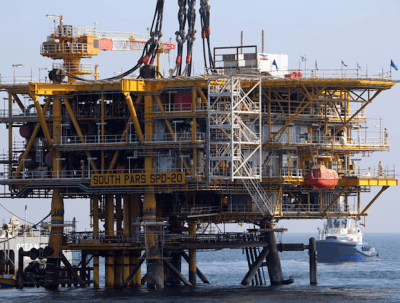 Iran has started pumping oil from the oil layer of South Pars. said Deputy Managing Director of the National Iranian Oil Company (NIOC) for Engineering and Development Affairs Gholam-Reza Manouchehri.
He said seven wells at the layer have already come on stream and their production will reach full capacity within a week. Shana news agency reported.
Manouchehri added that production from the layer will reach 35.000 barrels per day once its wells are fully operational.
Oil recovery from the oil layer of the offshore gas field was made possible after NIOC dispatched a floating production. storage and offloading (FPSO) unit over the layer.
By the time the FPSO recovers and processes a certain amount of crude oil from the South Pars oil layer. an oil tanker will berth next to it for loading. said Manouchehri. expressing optimism that the first crude oil consignment from the field will be ready for shipment in a matter of 30 to 45 days.
The Cyrus FPSO unit was dispatched to its designated offshore spot in February.
South Pars. a supergiant gas field Iran shares with Qatar in Persian Gulf waters. is estimated to contain over 14 billion barrels of oil in its oil layer.