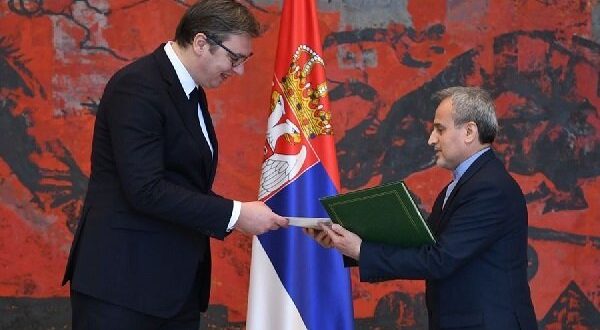 Serbian President received the credential of Iran’s new ambassador to Belgrade Rashid Hassanpour on Tuesday and emphasized on promoting cooperation with the Islamic Republic in various fields, especially economy and trade.

Serbian president Aleksandar Vučić extended his warm greetings to President Hassan Rouhani and referred to good relations between the two countries and emphasized on promoting cooperation with the Islamic Republic. He further hoped to visit Iran in the near future.

He also offered his condolences to the victims of COVID-19 in Iran and hoped that both countries would successfully overcome the current situation and work to implement bilateral cooperations.

Iran has a significant place among Islamic countries due to its history, civilization, rich and inspiring culture, and brave people. He said, appreciating the Islamic Republic of Iran’s firm stance in support of Serbia’s national sovereignty and territorial integrity.

Iran’s new Ambassador to Serbia also conveyed the greetings of President Hassan Rouhani to his Serbian counterpart and stressed the importance of expanding relations between the two countries in various fields, especially economy and culture.

Hassanpour further emphasized Iran’s stance in support of Serbia in international organizations and praised the independence of the country in foreign relations.