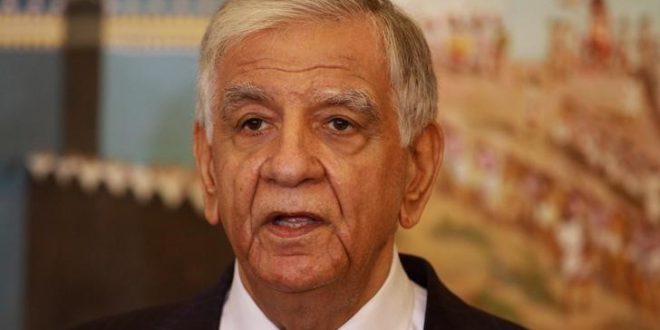 Iraqi Oil Minister Jabbar Ali al-Luaibi is slated to arrive in Tehran on Saturday to discuss energy issues with his Iranian counterpart Bijan Zangeneh. media reports said.
During his visit to Tehran. al-Luaibi will hold talks with Iranian officials on Iran-Iraq cooperation in shared oilfields and transferring Kirkuk oil to Iran refineries for processing and returning back the products. the Iraqi media reported.
Kirkuk oil. according to the preliminary agreements. is to be transferred to Kermanshah and Tabriz refineries and the oil products would be sent back to Iraq to be distributed.
Transferring Iran gas to the Southern Iraq via Shalamcheh and the two countries` international cooperation on energy are other topics that Luaibi is going to pursue with Iranian authorities.
Educating Iraqi experts in Iran and academic cooperation in energy sector are among other issues the Iraqi side is interested in.
In relevant remarks on Friday. Managing Director of the National Iranian Gas Company (NIGC) Hamid Reza Araqi said that Iran`s gas export to Iraq had reached 7-8 million square meters a day and the country had demanded increasing the figure.
Iran`s gas export to Baghdad via Khanaqin pipeline began in late June this year. Iraq and Iran have signed two agreements to transfer gas to Baghdad and Basra.
As Iraq is struggling with power shortage. Iran`s gas is expected to supply al-Sadr power plant in Eastern Baghdad and al-Mansoor in Diyala.