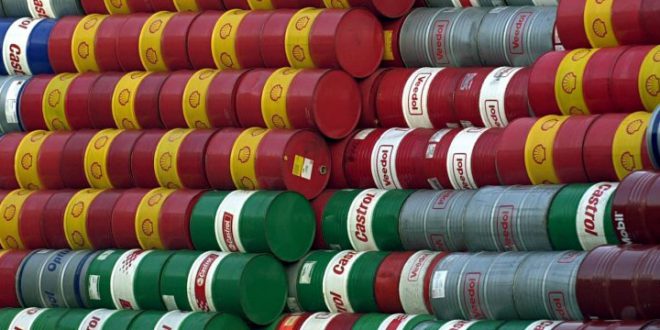 Oil trading was cautious on Monday amid ongoing tensions in the Middle East and after a rising rig count in the United States suggested producers there are preparing to increase output.
Brent crude futures LCOc1 were at $63.55 per barrel at 0614 GMT. up 3 cents from their last close. U.S. West Texas Intermediate (WTI) crude CLc1 was at $56.79 per barrel. up 5 cents.
Traders said crude prices were generally well supported as ongoing output cuts led by the Organization of the Petroleum Exporting Countries (OPEC) and Russia have contributed to a significant reduction in excess supplies that have been dogging markets since 2014.
“The excess of OECD oil inventories over their five-year average levels has fallen by more than 50 percent in 2017. with inventories currently at around 160 million barrels. If current trends continue. inventories are likely to return to the five-year average at some stage in 2018.“ consultancy Timera Energy said on Monday. adding that strong demand had also helped reduce the glut.
On the supply side. tensions in the Middle East raised the prospects of disruptions. traders said.
Bahrain said over the weekend that an explosion which caused a fire at its main oil pipeline on Friday was caused by sabotage. linking the attack to Iran. which denied any role in the incident.
Despite the Middle East tensions and OPEC-led supply cuts. traders were cautious in betting on further price rises. not least because of an increase in U.S. drilling for new production.
U.S. drillers added nine oil rigs in the week to Nov. 10. the biggest jump since June. bringing the total count up to 738. Baker Hughes energy services firm said on Friday.
The rig count RIG-OL-USA-BHI is also much higher than a year ago when only 452 rigs were active. indicating that the U.S. oil industry is comfortable operating at current prices.
U.S. oil producers have raised output C-OUT-T-EIA by more than 14 percent since mid-2016 to a record 9.62 million barrels per day.
This led to a slide in crude futures prices late on Friday away from over two-year highs reached early last week.
Some analysts warned that both WTI and Brent crude futures looked overbought following strong price rises in late October and early November. raising the risks of a downward correction.
“From a technical perspective. both contracts’ Relative Strength Indexes (RSI) are still in severely overbought territory. signaling that a potentially aggressive short-term downward correction is still a genuine possibility.“ said Jeffrey Halley. senior market analyst at futures brokerage OANDA in Singapore.
Brent hit its highest level since 2015 in November. pushing the RSI above 70 points. which implies an overbought market.