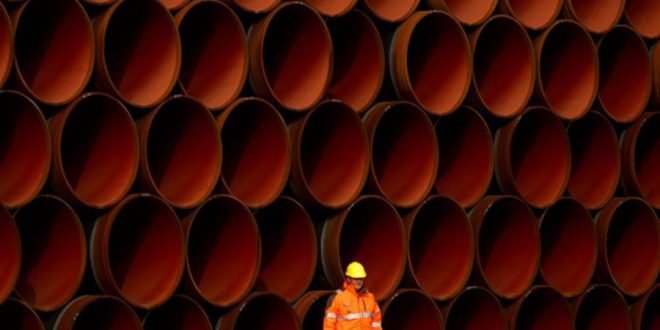 The Ministry of Foreign Affairs of Ukraine is convinced that if the Nord Stream-2 gas pipeline is not laid at the bottom of the Baltic Sea. Russia will have to negotiate a new contract with Ukraine on the transit of gas to the European Union through Ukraine. said Ukrainian Deputy Foreign Minister for the European Integration Olena Zerkal on Pryamyi TV.

The diplomat expressed the conviction that the European Union can create equal conditions for all countries to buy and transit gas so that Gazprom would not enjoy any advantages it is accustomed to.

`And after that. [the European Union] will be able to buy gas from Gazprom but on our eastern border. not on our western border. and to deliver gas to themselves through the territory of Ukraine. And this will be the most profitable route.“ Zerkal said. She said that Nord Stream-2 could not exist on those terms and doubted whether it would become operational at all.

At the same time. she was asked to explain why the EU has not been able to buy Russian gas at the Ukrainian-Russian border at the place where the gas enters the Ukrainian gas transportation system.

`Because now. this is no longer the subject of arbitration in Stockholm where we hoped that this issue would find a solution. the contracts that exist between Naftogaz and Gazprom state that these entry points are on our western border.“ Zerkal said. She explained that the EU hoped that during the arbitration proceedings they.h would be allowed to introduce the Third Energy Package and transfer the said entry points through negotiation with the Russians.

The Minister also recalled that the 2009 contract between the Russian gas monopoly Gazprom and Naftogaz of Ukraine for supply and transit of natural gas would end in 2019.

`We all are working towards new contracts that correspond to the European Third Energy Package and that would give everyone access to our pipelines. including Gazprom. But Gazprom would have to reserve a certain amount of gas that they would transport through the territory of Ukraine.“ Zerkal said. She believed. however. that another company. not Gazprom. should be responsible for transporting the gas to Europe.

Also. Zerkal added that Ukraine has strong positions on this matter because Ukraine has introduced all the necessary European standards into national legislation. Considering that. she also stressed that the current state of relations with Gazprom does not comply with Ukrainian legislation.

`As to how strong our positions are. it will also depend on whether by the end of 2019 this second North Stream exists. If it does not. Russia will have to negotiate with us and consider our legislation.“ the diplomat stressed.

Zerkal also explained that the Third Energy Package comprises the rules that are applied in the European Union to all operations in the gas market. `This is a question of what those who extract gas have. who transports the gas. and who sells it to the population and everyone else. They have to be independent from each other so that there is no monopoly.` Zerkal said. In her opinion. Gazprom does not want such unprofitable changes in the rules.

On March 21. European deputies supported the European Commission`s bill that extends the rules of the internal gas market of the EU to gas pipelines that are not on the ground. including Nord Stream-2. This was likely influenced by a joint statement made ten days earlier by the parliaments of Estonia. Lithuania. Latvia and Poland against the construction of Nord Stream-2.

The Nord Stream-2 system consists of two parallel branches of the pipeline. with a throughput capacity of about 27.5 billion cubic meters of gas per year. Ukraine. Poland. the United States. the Baltic States. Denmark and several other EU countries are against its construction. The European Commission is still discussing the project.