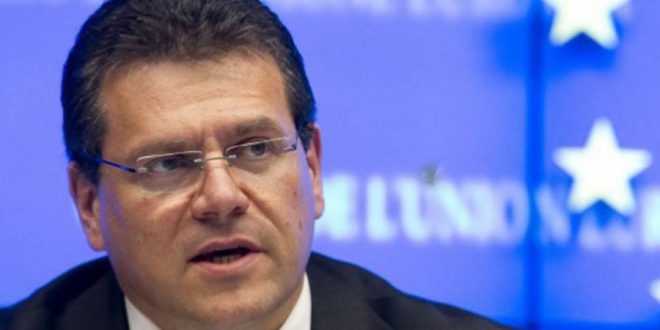 European Commission Vice President Maroš Šefčovič said on May 23 that the time has come for another round of trilateral talks with Russia and Ukraine to find a “Constructive and stable co-operation between Russia and Ukraine in the field of energy is of utmost importance for the European Union.“

Šefčovič’s statement from Brussels reiterated the need for continued. long-term transit of Russian gas through Ukraine to the EU that would be both reliable and commercially viable.

“I have reached out to both. Ukrainian and Russian partners. and invited them for trilateral talks which in the past. proved to be effective in reaching tangible. successful results.“ the European Commission Vice President said. while noting that the talks – supported by the EU Member States – should start as soon as possible in order to take stock of the gas-related matters that are important for the parties involved and to look into the possibility of transiting gas through Ukraine that goes beyond 2019.

In Sochi on May 18. Russian President Vladimir Putin told visiting German Chancellor Angela Merkel that a suspension of the transit of Russian gas through Ukraine is not expected. even after the completion of the Nord Stream-2 project. the planned pipeline that will carry gas from Russia to Europe and fully bypass Ukraine.

At the GLOBSEC Forum in Bratislava on May 18. where Šefčovič was also a key speaker. Sergey Utkin. the head of Strategic Assessment Section at Moscow’s Primakov Institute. said in an interview with New Europe that Russia might continue to use Ukraine as a gas transit country.

“I’m not sure about this idea that Nord Stream-2 would let Russia just forget about the transit though Ukraine.“ Utkin said. “Ukraine will still matter and it’s a big concern about what sort of technical condition those pipelines are in. much more so than the economic justification and the reasoning for using them in terms of the volumes of commodities that are transported via the pipelines.“ he said. adding that there will still be reasons to use Ukrainian transit if the technical condition of the pipelines remains in proper shape.

“It will not be an easy issue either politically and technically. but one of the ideas that might eventually work is the idea of a consortium that could bring together representatives from the West. Russia. and Ukraine…they will look into the technical condition of the pipelines and how the resources are transported.“ Utkin said.

Utkin also told New Europe that Russia and the EU have what he called “a reliable energy relationship“ that is based on a mutually beneficial interdependence.

“The amount Russia natural resources that will go to the EU. just because you have the infrastructure. will be significant and that will be significant for the Russian economy…and significant for the EU as well.“ said Utkin. adding. “Both sides are interested in making sure that this dependency is not critical to them. If there is some worse case scenario happening. they will still be able to survive. That’s the kind of diversification scenario both sides will strive to achieve. For Russia. it will probably in terms of LNG (liquefied natural gas) and pipelines to China.“

The European Union has also strived to diversify its energy resources by reducing reliance on Russia and bringing gas via new routes to Europe. including from the Caspian region.

“The interdependence will still be there.“ Utkin said. “Even in the most severe days of the Cold War. the Soviet Union was still supplying energy resources to Western countries. This is natural when you have vast (energy) resources next to you. When you have the infrastructure available…you use that.“