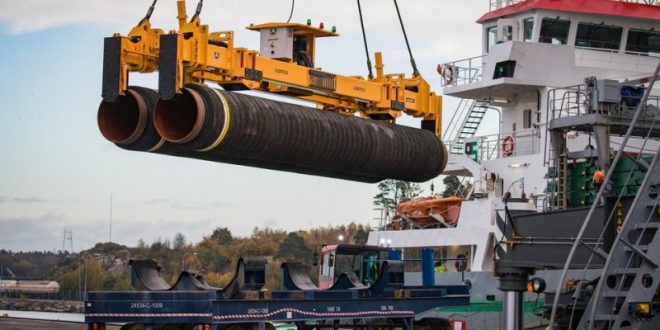 Russian President Vladimir Putin said that Russia is prepared to fully finance the construction of the Nord Stream 2 gas pipeline if the US places sanctions on participants of the consortium.

Putin informed the German government of these plans during his visit to the Schloss Meseberg on August 18. when he met with German Chancellor Angela Merkel. the Suddeutsche Zeitung  reports. citing informed sources.

At present. the Nord Stream 2 pipeline is being built by an international consortium of which 50% belongs to Russia’s Gazprom. The consortium members include BASF subsidiary Wintershall. Uniper and Shell.

The US has repeatedly threatened to place sanctions on Russia’s energy sector to punish it for Moscow’s interference in the US presidential election campaign in 2016. The sanctions could also affect Russia’s western partners.

However. US President Donald Trump said recently that the US will not place sanctions on Nord Stream 2 participants. “We do not plan to do this. We are just sorry that Germany is going to be paying billions of dollars for energy from Russia. And believe me. the Germans are not going to like it.“ Trump said. calling Germany’s policy on this matter “absurd“.

Putin’s plans to fully finance the project may be met with serious objections from the European Commission. because EU competition laws stipulate that the producer and supplier of energy resources may not be the same entity.

Putin. who has already demonstrated incomprehension of the EU’s directives. has also been displeased by Germany suddenly pushing for the construction of a gas reception terminal which might receive gas from the US. Süddeutsche Zeitung observes.

The laying of the pipeline in the Finnish waters of the Gulf of Finland began on September 5.

The Nord Stream 2 gas pipeline is designed to span the Baltic Sea. connecting Russian suppliers to European consumers. The pipeline has a projected total length in excess of 1.200 km. and a capacity of 55 billion cubic meters per year. The cost is estimated at almost €10 billion. Other participants in the project include Engie. OMV. Shell. BASF and Uniper.

The project has acquired full authorization for construction and operation from Germany. Finland and Sweden.