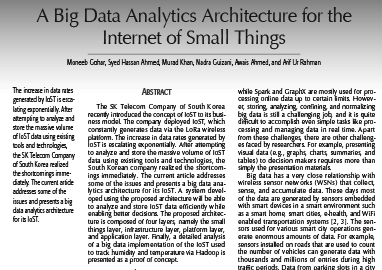 A Big Data Analytics Architecture for the Internet of Small Things

The SK Telecom Company of South Korea recently introduced the concept of IoST to its business model. The company deployed IoST. which constantly generates data via the LoRa wireless platform. The increase in data rates generated by IoST is escalating exponentially. After attempting to analyze and store the massive volume of IoST data using existing tools and technologies. the South Korean company realized the shortcomings immediately. The current article addresses some of the issues and presents a big data analytics architecture for its IoST. A system developed using the proposed architecture will be able to analyze and store IoST data efficiently while enabling better decisions. The proposed architecture is composed of four layers. namely the small things layer. infrastructure layer. platform layer. and application layer. Finally. a detailed analysis of a big data implementation of the IoST used to track humidity and temperature via Hadoop is presented as a proof of concept.

Data Analysis and System Evaluation The proposed system is implemented using Spark and GraphX with a single-node Hadoop setup on an UBUNTU 14.04 LTS coreTMi5 machine with a 3.2 GHz processor and 4 GB memory. For real-time traffic. we generated Pcap packets from the datasets by using Wireshark libraries and retransmitted them into the developed system. Hadoop-pcap-lib. Hadoop-pcap-side. and Hadoop Pcap input libraries are used for network packet processing and generating Hadoop Readable formats (sequence file) at the collection and aggregation step so that the data can be processed by Hadoop and GraphX. GraphX is used to build and process graphs with the goal of making smart transportation decisions. We have considered the massive volume of data from [14. 15]. The intensity of the traffic varies between times on the same road. The intensity analysis of the various times of day helps administrators manage and make a proper plan for the traffic at that time.