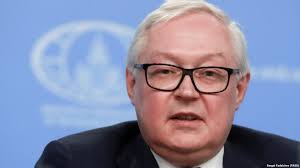 Iran Looking at more Cuts to JCPOA Commitments by Sep

Iran’s getting back to the full and unconditional implementation of its commitments under the nuclear deal looks highly unrealistic at this point. said Russian Deputy Foreign Minister after a JCPOA meeting on Sunday.

Iran is looking at further reduction of its commitments under JCPOA by September 4-5 as part of less-for-less approach. Russian Deputy Foreign Minister Sergei Ryabkov said on Sunday after a meeting of the Joint Commission of the Joint Comprehensive Plan of Action (JCPOA). according to TASS.

`Further we are in early September. with September 4-5 being a reference date. when Iran plans to take the so-called third step to reduce its commitments as part of the less-for-less approach.` he said.

`We called on the Iranians to refrain from that after all.` he said. adding that it is necessary to see to it that Iran really has the economic possibilities that were provided by the deal and lost due to the US sanctions.

A year after the US` withdrawal from the Iran nuclear deal and the re-imposition of sanctions. as well as lack of any practical measures from the other signatories to the agreement for securing Iran`s economic interests. Tehran announced in May 2019 that it would reduce its commitments to the deal in various steps. The country highlights that all these reductions are according to paragraphs 26 and 36 of the deal and will be reversible when the E3 begin to fully comply with their own commitments under the JCPOA.

`Some participants think that Iran must get back to the implementation of its commitments in full without any additional reservations or conditions.` he said. `But in the current situation. it looks absolutely unrealistic.`

Ryabkov added that the project for the modernization of the heavy water reactor at Iran’s Arak is nearing the equipment purchasing stage.

`Progress has been made on the Arak project.` he said. `It is not nominal. The stage of practical. purchasing activities is nearing. It is a separate question who will supply equipment there and what kind of equipment. But as a matter of fact. it is not a political question. It is a question to the designers.`

`We are not going to supply any equipment there. All we can do is to offer our consultancy.` he added.

The European special purpose vehicle INSTEX aiming at facilitating trade between the European Union and Iran is operating in the pilot mode and a series of procedures are needed to make fully operational. Russian Deputy Foreign Minister noted.

No understanding on the situation around the Grace 1 tanker with Iranian oil that had been detained in the Strait of Gibraltar was reached at Sunday’s meeting of the Joint Commission of the Iran nuclear deal in Vienna. Ryabkov said.

It is too early to speak about a date for a ministerial meeting on the Iran nuclear deal. Ryabkov said after the meeting.

`It is too early to speak about a ministerial meeting on the JCPOA. Extra work will be done at the expert level in the near future. Experts continued to discuss various aspects of the deal already today. It look like additional discussions with the capitals. telephone calls and paperwork will be needed to agree an optimal time for such a contact.` he said.

He said that Moscow would not like to delay such a meeting but thinks it not right to force it at the expense of its tasks either.

Iranian Deputy Foreign Minister Abbas Araghchi said on Sunday that a ministerial meeting would take place soon but `the time is not fixed yet.`