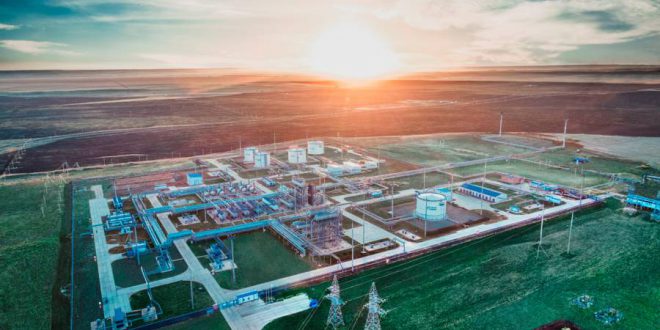 Gazprom Neft and the Government of the Yamalo-Nenets Autonomous Okrug are to expand their cooperation in developing viable technologies for exploiting Achimovsky-strata oil deposits. with Dmitry Artyukhov. Governor of the Yamalo-Nenets Autonomous Okrug. and Alexander Dyukov. CEO. Gazprom Neft. having signed a Memorandum of Cooperation on creating a technology center for developing Achimovsky deposits at the St. Petersburg International Economic Forum (SPIEF).

This new center is being established to bring Achimovsky reserves—which are categorized as hard-to-recover reserves—into development. Gazprom Neft’s geological prospecting specialists have already developed the industry’s first ever digital model of the Achimovsky strata—this tool being the result of analysing over 1.5 million square km of fields in Western Siberia. Company specialists estimate the potential hydrocarbon resources of the West Siberian basin’s oil- and gas-bearing Achimovsky strata to be as much as 66 billion tonnes of oil equivalent (Btoe). The State Reserves Register currently includes reserves in place at Achimovsky strata of 10.4 billion tonnes. as well as 4.4 Bcmg and 1.4 billion tonnes of gas condensate. More than half of these reserves lie within the Yamalo-Nenets Autonomous Okrug.

A number of technological challenges currently need to be overcome before the Achimovsky strata can be developed effectively. To which end. Gazprom Neft has proposed establishing a test-site at one of the company’s license blocks in the Yamalo-Nenets Autonomous Okrug for pilot-testing new—and developing pre-existing—technologies. The concept behind the technology centre envisages cooperation between subsoil license holders. equipment and software producers. academic institutions. research organizations and innovation centers. An integrated information platform and Data Center are also planned. to facilitate experience sharing.

Experts estimate that successful implementation of this project could result in additional tax revenues of up to RUB10 trillion. The Memorandum signed at the SPIEF also envisages making the case for a specific legal framework for the Achimovsky reserves.

Alexander Dyukov. chairman of the management board. Gazprom Neft. commented: Implementing this major investment project in the Yamalo-Nenets Autonomous Okrug is of strategic importance not just for our company. but for the country’s entire oil and gas industry. We’re talking about major resources here: provisional estimates suggest developing these could provide a further 20 to 40 million tonnes’ additional production. every year. We are now pro-actively developing a range of technologies for the viable development of the Achimovsky deposits. Developing a test-site here will consolidate resources from all stakeholders. both in addressing this goal and in developing the oil and gas industry. as a whole.

Dmitry Artyukhov. Governor of the Yamalo-Nenets Autonomous Okrug. stressed: Yamal offers huge potential. concentrated around developing the Achimovsky strata—a strategic resource in ensuring the sustainable growth of oil production in the country. Accessing these resources was. until quite recently. impossible. due to their geological structure. Gazprom Neft now has the technological capabilities to do this. and the Okrug Government will be providing unstinting. all-round support to the company. Addressing this technologically challenging task will. ultimately. deliver major resources for the social and economic development of our Okrug. and the country as a whole.