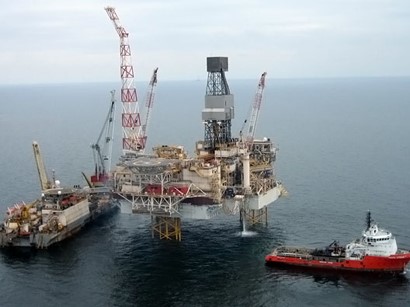 The work on the project of developing Stage 2 of Azerbaijani Shah Deniz gas condensate field has been completed by 93 percent. Khoshbakht Yusifzade. first vice president of Azerbaijan’s State Oil Company SOCAR. said.
Yusifzade made the remarks at the 14th International Caspian Oil and Gas Conference in Baku June 1.
He said that two wells are being drilled at the field. adding that work at another well is under completion.
`The South Caucasus Pipeline Expansion Project has been completed by 85 percent.” he said. “The Trans-Anatolian Natural Gas Pipeline (TANAP) has been constructed by 72.4 percent.”
“The section of the pipeline stretching to the city of Eskisehir will be commissioned in the middle of 2018.” he added. “Afterwards. Turkey will be able to receive more than 6 billion cubic meters of gas annually from Shah Deniz field. TANAP’s section stretching to the border with Greece is planned to be commissioned in 2019.`
As part of the Stage 2 of the Shah Deniz field development. the gas will be exported to Turkey and European markets by expanding the South Caucasus Pipeline and the construction of Trans Anatolian Natural Gas Pipeline (TANAP) and Trans Adriatic Pipeline (TAP).
All those projects are a part of the Southern Gas Corridor.
The Southern Gas Corridor is one of the priority energy projects for the EU. It envisages the transportation of 10 billion cubic meters of Azerbaijani gas from the Caspian region to the European countries through Georgia and Turkey.
At the initial stage. the gas to be produced as part of the Stage 2 of development of Azerbaijan`s Shah Deniz field is considered as the main source for the Southern Gas Corridor projects. Other sources can also connect to that project at a later stage.