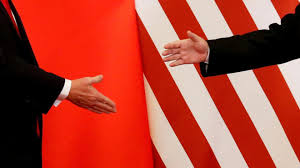 Oil prices rose almost 5% on Tuesday after the United States said it would delay imposing a 10% tariff on certain Chinese products. easing concerns over a global trade war that has pummeled the market in recent months.

The Chinese products include laptops and cellphones. The tariffs had been scheduled to start next month.

That put Brent futures on track for their biggest daily percentage gain since December.

The Chinese Ministry of Commerce said in a statement on Tuesday that U.S. and Chinese trade officials spoke on the phone and agreed to talk again within two weeks.

“The possibility that the United States and China can get the trade talks on track … is raising hopes that they might actually get some type of deal.“ said Phil Flynn. analyst at Price Futures Group in Chicago.

“That’s why we are seeing this big rebound in prices.“ Flynn said.

Before the U.S. announcement about the tariff delay. Brent futures were still trading about 20% below the 2019 high they hit in April.

U.S. oil output from seven major shale formations was expected to rise by 85.000 barrels per day (bpd) in September to a record 8.77 million bpd. the Energy Information Administration forecast in a report.

Saudi Arabia. the de facto leader of the Organization of the Petroleum Exporting Countries (OPEC). last week said it planned to keep its crude exports below 7 million bpd in August and September to help drain global oil inventories.

“Saudi Arabia and its Gulf allies standing firm on their commitment to the OPEC+ output-cut agreement has supported prices.“ said Abhishek Kumar. head of analytics at Interfax Energy in London.

OPEC and its allies. known as OPEC+. have agreed to cut 1.2 million bpd of production since Jan. 1.

In the United States. meanwhile. analysts forecast crude stockpiles fell by 2.8 million barrels last week. according to a Reuters poll.

“If we get the drawdown in (U.S.) inventory that most people are looking for. that is going to get the market a lot tighter.“ said Flynn at Price Futures.

The American Petroleum Institute (API). an industry group. was due to release its inventory report at 4:30 p.m. EDT (2030 GMT) on Tuesday. followed by U.S. government data on Wednesday morning.