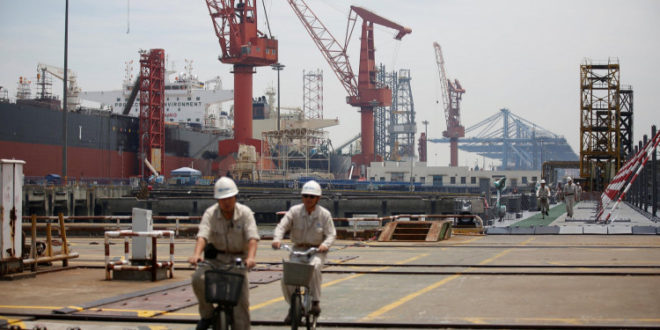 China State Shipbuilding Corporation (CSSC) has just signed a major deal worth an estimated 20 billion yuan or around $2.8 billion with a Middle Eastern oil producer. The world’s largest shipbuilding conglomerate announced on Wednesday that it has inked the agreement with Qatar’s national oil company.
The major deal is currently the largest export deal of its kind ever made in China’s shipbuilding sector. Under the contract, CSSC’s subsidiary Hudong-Zhonghua Shipbuilding will be manufacturing liquefied natural gas (LNG) carriers for Qatar Petroleum. The state-owned Middle Eastern company operates all major oil and gas activities in Qatar, including refining, transport, storage, exploration, and production operations.
According to CSSC, the contract was signed via a teleconference on Wednesday afternoon. The event was attended by top executives from CSSC and Hudong-Zhonghua Shipbuilding in Beijing as well as top oil leaders of Qatar Petroleum in Doha.
The ships that will be built by Hudong-Zhonghua Shipbuilding are G4+Changhui LNG carriers capable of carrying up to 174,000 cubic meters. The ships feature high-speed low-fuel consumption engines that meet international environmental and emission standards. Over the past years, China has been pushing to further develop its shipbuilding industry, one of the core industries that the country believes will be the drivers of future growth.
CSSC did not reveal exactly how many of the LNG carriers were ordered by Qatar Petroleum. However, the Middle Eastern energy giant did mention last year that it was looking into getting more than 100 LNG carriers to expand its operations. The company had issued an invitation to tender to fulfill its requirements.
CSSC chairman, Lei Fanpei, acknowledged during the signing ceremony that the global energy market has been heavily affected by the ongoing economic disruptions caused by the coronavirus pandemic. He noted that the decision made by Qatar Petroleum to expand its LNG projects in cooperation with CSSC will go a long way in stabilizing the international energy sector.
Apart from the supply chain disruptions, the pandemic has also resulted in a massive drop in global demand for fuel amid the ongoing travel restrictions and stay-at-home orders. This has resulted in oil prices dropping to new lows, triggering an oil price war that has fortunately been recently resolved.
Lei stated that the company and its partners will go all-out in ensuring that the terms of the contract are fulfilled to make it a shining example of cooperation for other players in the global energy industry. The executive urged all parties to further strengthen collaborative efforts to support the global energy market and to bolster bilateral friendships.

Previous Shamkhani Lauds IRGC’s Success in Launching 1st Military Satellite of Iran
Next Araghchi Calls on Intl. Community to Deal with US Illegal Sanctions on Iran