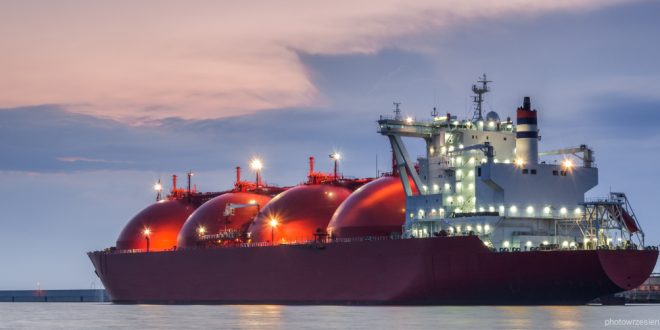 LNG TANKER - Ship at dawn moored to the gas terminal

Recovering LNG demand, buoyed by China’s record-high LNG imports and low storage levels in Europe will combine to make 2021 a “remarkable year for LNG shipping”, according to a Drewry Maritime Research senior lead analyst Aman Sud.
“LNG shipping rates, which started the year on a high are expected to end the year at similar levels, with the bull-run expected to last until Q2 2022 when we expect demand to normalise,” says Mr Sud.
In the winter of 2020, LNG carrier spot rates surged, topped by the astonishing US$350,000 per day for the BP-chartered Nigeria LNG’s 175,000-m3 LNG Abalamabie in early February 2021. The lack of available tonnage at the time forced the cancellation of a number of LNG cargoes from the US. Cognizant of that, charterers are securing vessel capacity now for the peak season, highlighting their bullish stance on the winter of 2021.
Drewry says LNG shipping rates are on “an unseasonal uptrend” where spot rates for a standard tri-fuel diesel-electric (TFDE) LNG carrier were around US$70,000 per day for June 2021 – more than double the levels seen in 2020 and 30% up from 2019. Spot charters rates are trending higher. As of 4 August, rates for a one-year time charter for a 155,000-165,000 m3 TFDE LNG carrier were US$93,000 per day, according to Fearnleys.
Mr Sud says: “The current LNG market scenario, with high LNG demand in Asia and low storages in Europe, indicates a summer with all [the] attributes of winter.” Spot LNG prices are seven times higher than 2020 and LNG shipping rates have doubled in June 2021 from last year, he points out.
Spot Asia LNG prices are at their highest levels since January, surpassing US$16 per mmbtu, reported Reuters.
Mr Sud says gas shortages last winter have prompted China to begin “stockpiling much earlier in 2021, with recovering demand from the industrial sector and coal-to-gas switching in the power sector driving growth.”
Among the Chinese buyers looking to meet peak summer demand and preparing for winter are Shenzhen Energy and Beijing Gas, which were both seeking LNG cargoes for the months from August to October, according to a report by Reuters.
Record imports in China
Record imports in April, May and June made China the world’s largest importer of LNG, momentarily surpassing Japan, which regained the top spot in July. Overall, there were an estimated 30.4M tonnes of LNG delivered globally in July, about 75% of which was accounted for by Asia. Japan imported 6.74M tonnes, China 6.05M tonnes and South Korea 3.97M tonnes of LNG.
Last year, China imported 67M tonnes of LNG – nearly 7M tonnes more than 2019, according to Shell. With its target of becoming carbon neutral by 2060, China’s appetite for LNG demand is expected to continue to grow in the decades ahead.
More than 44% of China’s LNG – about 28.9M tonnes – was imported from Australia in 2020, but the country could well look to Qatar as a means of diversifying its long-term supply.
At the end of June, Qatar Petroleum (QP) inked a 10-year sales and purchase agreement (SPA) with Shell, under which it will deliver 1M tonnes of LNG per year to China starting 1 January 2022. QP supplies China with about 12M tonnes of LNG per year under long-term SPAs.
But with rising Covid-19 cases in India and Thailand negatively impacting their LNG imports, Mr Sud warns that the market is not out of the woods yet: “The development in these countries is a stark reminder that the pandemic is not over yet and there can be more volatility in LNG demand and supply over 2021-22.”