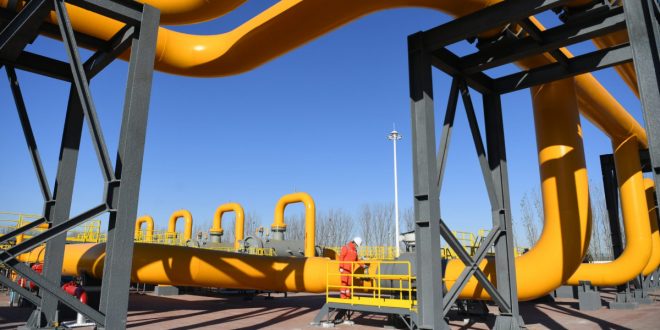 The rising output is a result of multiple factors such as technology progress and China’s accelerated efforts to develop natural gas for environmental protection purpose, experts said, but the output is still unable to catch up with the rapid growth in domestic demand.

According to the thepaper.cn report, China has established four major natural gas producing bases including in Northwest China’s Qinghai and Xinjiang’s Tarim basin.

The climb in China’s natural gas output has been boosted by Chinese energy giants’ efforts to develop clean energy sources. For Instance, the CNPC has helped drive up the proportion of natural gas in China’s primary energy structure from 4.8 percent in 2012 to 9.1 percent in 2021, thepaper.cn reported.

The CNPC also revealed in its recent shareholders’ meeting that it has added new energy business such as hydrogen, and low-carbon technology in its business scope. So far, the company’s domestic natural gas output equivalent has exceeded 100 million tons.

Qian Zhijia, the general manager of a subsidiary under PetroChina, said during that the company had sold more than 200 billion cubic meters of natural gas in 2021, which is equivalent to replacing 273 million tons of standard coal and reducing 274 million tons of carbon dioxide emissions, thepaper.cn report noted.

Lin Boqiang, director of the China Center for Energy Economics Research at Xiamen University, said that the China’s rising natural gas production also has something to do with China’s progress in natural gas exploration and development technology, which he described as “world class”, as well as speeding up gas exploitation in recent years to meet domestic clean energy needs.

However, he pointed out that one bottleneck holding back China’s natural gas industry is that the energy’s exploitation speed still lags behind surging demand for natural gas, which has resulted in increased imports from abroad.

According to Lin, China’s imports about 40 percent of natural gas from foreign markets, compared with about 30 percent a few years ago.

“Developing liquefied natural gas might be a solution to solve this problem, but to exploit natural gas at an orderly speed is also important,” Lin said, predicting that China’s reliance on overseas natural gas could rise to 50 percent in the coming years