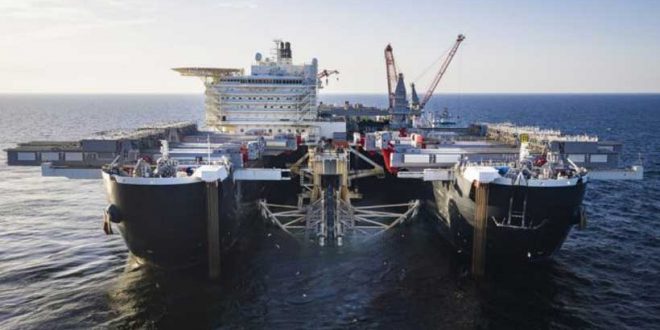 German Lawmaker Calls for ‘Countersanctions’ against US over Nord Stream 2

On Wednesday, US State Department Principal Deputy Spokesperson Jalina Porter signalled the Biden administration’s readiness to use all available tools to try and prevent the completion of Russia’s Nord Stream 2 gas-exporting pipeline.
A German lawmaker has urged Berlin to initiate countermeasures against the US over the Nord Stream 2 gas pipeline project.
Steffen Kotre, a member of the German parliament’s energy committee from the party Alternative for Germany (AfD), said on Wednesday that the situation around Nord Stream 2 remains unclear in light of Washington’s latest decision to scrap a number of sanctions against the project’s operator.
“It’s common knowledge that the construction of the pipeline is coming to a close. I cannot judge how seriously the US administration has decided to review its position on Nord Stream 2, but I hope this important project will be completed successfully”, Kotre stressed.
At the same time, he added that “given the German government opposing [the] US’ aggressive actions against Nord Stream 2 only rhetorically, there is a growing concern the project will not be completed, so it would be politically correct to initiate countersanctions” on Washington by raising customs duties on liquefied natural gas supplies from America, among other things.
Kotre argued that “if the threat of sanctions from the US administration was really dictated by concern for European energy security, they would have imposed sanctions against the German government long ago”.
According to the lawmaker, a decision by German Chancellor Angela Merkel’s government to simultaneously abandon the development of coal and nuclear energy in the country poses a “serious threat to the energy security” of Germany and Europe. In light of this, the Nord Stream 2 project will “help to mitigate the consequences of this move”, Kotre underscored.
Nord Stream 2 ‘Will Be Completed’, German MP Says
He spoke as fellow AfD member Waldemar Herdt of the Bundestag’s foreign affairs committee claimed that by standing up to the US when it comes to Nord Stream 2, Germany has managed to defend its national interests for the first time since the end of the Second World War.
“It is pointless to pressure Germany; Nord Stream 2 will be completed [because] we have no alternative, [and] the Germans will work with the Russians”, Herdt said, adding the project “is not a whim” and that “the German economy needs it”.
“It is less expensive, more ecological, more practical than other energy supply options. There are no arguments against this project, but for Washington’s orders: do as you are told”, Herdt argued, insisting that if the US pressure does not abate Berlin’s foreign policy trajectory may shift toward Russia.
Washington Waives Sanctions against Nord Stream 2 Operator
The remarks came after US Secretary of State Antony Blinken said during a meeting with Russian Foreign Minister Sergei Lavrov that Washington had decided it was “in the national interest” of the US to waive the application of sanctions on Nord Stream 2 AG, its CEO Matthias Warnig, and Nord Stream 2 AG’s corporate officers.