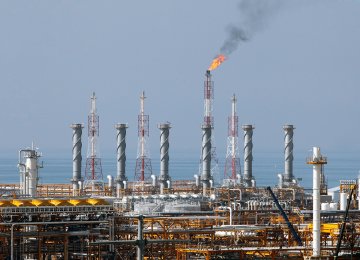 Managing Director of Iranian Offshore Engineering and Construction Company (IOEC) Mohammadreza Zahiri said that production from South Pars oil layer, which is located in the country’s giant South Pars gas field, is going to increase by 10,000 barrels per day (bpd), Shana reported.
Speaking in a press conference on the sidelines of the 26th International Oil, Gas, Refining, and Petrochemical Exhibition (Iran Oil Show 2022) on Saturday, Zahiri said: “With the implementation of a new contract for the development of phase 2 of the South Pars oil layer, production from this joint field will increase by 10,000 barrels per day.”
Regarding the signing of a contract with a foreign partner for the development of phase 2 of the South Pars oil layer the official said: “The contractor has already been selected and we only made some changes in parts of the contract.”
Iran able to build pressure booster platforms
Mentioning the development of the South Pars gas field and the need for pressure boosting equipment in this field in the near future, Zahiri said domestic manufacturers have the ability to build pressure booster platforms for the South Pars field and we don’t need foreign partners in this regard.
“One of the major challenges of constructing these platforms is the need for precise designing of its foundations due to the high weight of facilities installed on the platform,” he said.
According to the official, IOEC is currently designing these platforms in collaboration with the country’s universities and there is no problem in designing, constructing, transporting, and installation of such platforms, but building the jacket takes some time because the exact weight of the equipment used on these platforms should be determined first.
Phase 11 output to be transferred to onshore refineries by late Dec.
Elsewhere in his remarks, Zahiri mentioned the development of South Pars phase 11 and noted that a platform from Phase 12 of the giant gas field is planned to be transported to the said phase, and after installation of the mentioned platform the produced gas will be transferred to onshore refineries by the end of autumn (late December).
Earlier this month, Karim Zobeidi, National Iranian Oil Company (NIOC)’s director of corporate planning, said that the Phase 11 development project is expected to produce 14 million cubic meters (mcm) of gas on a daily basis by the end of the current Iranian calendar year (March 20, 2023).
IOEC contributing to various projects outside Iran
The IOEC managing director further noted that his company is implementing several projects outside the country in addition to the development projects being carried out inside.
The official did not provide any details on the mentioned projects, pointing to some sanction-related limitations as the reason.