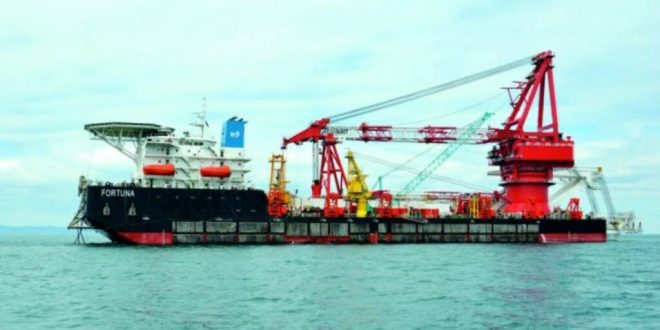 A Norwegian firm that was meant to have provided technical and safety certificates for Russia’s gas pipeline to Germany has abandoned the project due to US sanctions.
“DNV GL will cease all verification activities for the Nord Stream 2 pipeline system in line with sanctions and while sanctions are in place,” it said in a statement sent to EUobserver on Monday (4 January).
“We are implementing a plan to wind down our verification support to the project. As the situation currently stands, DNV GL cannot issue a certificate upon the completion of the pipeline,” it added.
A spokesman for the firm said the decision came following new US legislation passed on Friday called the Protecting Europe’s Energy Security Clarification Act.
He declined to comment on how DNV GL’s decision might impact the pipeline.
“Legal requirements for certification and verification vary depending on national jurisdictions,” he said.
But he noted that the Norwegian company had been working on Nord Stream 2 for five years prior to the US crackdown, indicating that it might take a long time for a different firm to step in and do the job instead.
The latest blow to the Russian-German project came after previous US sanctions prompted Swiss-based firm Allseas to abandon pipe-laying on the last segments of the 1,224km pipe in late 2019.
A Russian ship, the Fortuna, later stepped in to replace Allseas.
The Fortuna completed a 2.6-km section in German coastal waters in late December.
And it plans to lay the final, 100 km-long, segment in Danish waters, in work starting on 15 January.
The Russian-owned Nord Stream 2 consortium and the Russian mission to the EU did not comment when asked by EUobserver if DNV GL’s decision would harm the project.
The €9.5bn pipeline would mean some 80 percent of Russian gas exports to the EU would flow via Germany, making it easier for Russia to cut off countries such as Poland or Ukraine in future for political reasons.
It was meant to have been completed by 2021.
But US officials, speaking to the Reuters news agency last week, said more sanctions were to come.
“We’ve been getting body blow on body blow to this, and now we’re in the process of driving a stake through the project heart,” one of the US officials said.
The US has complained that Nord Stream 2 was a geopolitical instrument designed to increase EU dependence on Russia, in views shared by several central European and Nordic countries.
But Germany has vowed to go ahead even if the incoming administration of president-elect Joe Biden continues to oppose it.
“We do not need to talk about European sovereignty if that is understood as us doing everything in future the way Washington wants us to,” German foreign minister Heiko Maas told the DPA news agency on 28 December.
“The German government will not change its stance on Nord Stream 2,” he said, adding: “The important thing is that we [Germany and the US] are aligned on the central strategic and geopolitical issues, that we are on the same side of the field”.
Germany’s Uniper and Wintershall, Anglo-Dutch oil firm Royal Dutch Shell, Austria’s OMV, and French firm Engie have co-financed the Russian project.