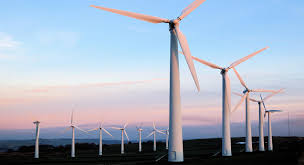 Oil demand may never recover from the blow dealt to it by Covid-19, according to BP’s 2020 Energy Outlook.
In two of the report’s three modelled scenarios, ambitious climate policies mean that global oil consumption already peaked at 100m barrels per day in 2019. Even under a “business-as-usual” case, demand for the fossil fuel would briefly rebound before hitting a terminal plateau in the early 2020s. By BP’s own admission, it’s not a lucrative moment to be an oil company. But it’s a promising time to make acquisitions in the wind industry.
Last September, the oil major purchased a $1.1bn stake in two offshore wind projects being developed off the east coast of the US by Norway’s Equinor. In the aftermath of the pandemic, few industries looked like safe investment prospects – with the notable exception of offshore wind. According to a market outlook published by the Global Wind Energy Council (GWEC) last November, a total of 71.3GW of wind power was expected to be installed in 2020. This is just a 6% decrease from pre-Covid forecasts.
Europe in the lead
At present, Europe’s 22GW of offshore wind capacity makes it the largest market in the world, with three-quarters of global installations. But its lead won’t be long-lived. China is expected to add 52GW of its own capacity by 2030, while offshore wind developments in North America will start to pick up momentum around 2024. The latter region has been notoriously slow to catch on to the wind revolution and has just 30MW of offshore capacity, though GWEC believes this will rise by 23GW in about 10 years’ time. At this rate, Europe will have just under half of all the world’s offshore wind power by 2030.
Despite the sector’s expansion, offshore turbines do not yield the cheapest form of wind energy. That mantle is held by their terrestrial counterparts. Figures published last summer by the International Renewable Energy Agency (IRENA) found that the cost of both onshore and offshore wind had declined by around 9% since 2010 – reaching prices of $0.053/kWh and $0.115/kWh respectively. Crucially, the agency also revealed that new solar photovoltaics and onshore wind power now cost less than keeping many existing coal plants in service.
Economic benefit
“Renewable energy is increasingly the cheapest source of new electricity, offering tremendous potential to stimulate the global economy and get people back to work,” said IRENA’s director-general, Francesco La Camera. “Renewables must be the backbone of efforts to restart economies in the wake of Covid-19. With the right policies, falling renewable power costs can shift markets and contribute greatly towards a green recovery.”
While onshore wind remains the largest non-hydro source of renewable energy, significant growth is needed to align the sector with major climate targets. The International Energy Agency’s sustainable development scenario – which shows how the world could simultaneously deliver on the UN’s three energy-linked sustainable development goals – calls for annual onshore wind generation increases of 10% to 2030. The story of wind power echoes the narrative of the renewable energy industry as a whole: tremendous progress has been made, but there’s still a mountain to climb before targets are achieved.
Ever-larger turbines are being installed at sea and on land. However, some industry insiders believe wind’s most critical breakthrough will come when turbines can be placed in the rough waters of the open ocean en masse. So-called floating wind turbines, which are mounted on floating structures rather than fixed foundations, can be placed in water deeper than 60m. This allows the technology to harness some of the strongest wind speeds in the world.
Floating potential
In 2017, the world’s first commercial floating windfarm began operating off the coast of Scotland, and several similar projects are at various stages of development. The 50MW Kincardine floating windfarm, located 15km south-east of Aberdeen, was due to be the largest in the world when commissioned at the end of 2020. The project uses a single 2MW turbine and five 9.5MW MHI Vestas wind turbines and will power 35,000 households.
The costs of floating wind power will fall as developers gain experience and economies of scale grow. The true revolution in wind energy has just begun – and, with the climate crisis growing more urgent by the day, turbines of all stripes need to be installed at pace.

Previous Turkish Energy Minister: “A Natural Gas Futures Market will be Opened this Year”
Next Iran Joins Club of Nations to Generate Electricity from Hydrogen