The National Iranian Oil Refining and Distribution Company is in talks with European and Asian companies to use their expertise in reducing mazut production and increasing output of fuels with higher value added in the major refineries. Tehran. Tabriz. Isfahan. Abadan and Bandar Abbas.
Italy`s Tecnimont. China`s Sinopec. Japan`s Marubeni. JGC Corporation. JX Nippon Oil &amp. Energy and Chiyoda as well as South Korea`s Daelim are among foreign investors that have shown interest in the refinery rehab scheme. Mehr News Agency reported.
To curb export of hydrocarbons such as oil and natural gas and boost petrochemical production with higher value. Iran wants not only to upgrade its dilapidated refineries but also build new ones.
According to Abbas Kazemi. managing director of NIORDC. domestic refineries produce high levels of mazut. a polluting fuel which is worth one-third of crude oil.
Kazemi has said that along with raising the refining capacity. mazut production in Iranian refineries is planned to be cut to 10% from the current 30%.
Tehran has signed an agreement worth $1.3 billion with China Petroleum and Chemical Corporation (Sinopec) for reconditioning Abadan Oil Refinery in the southern Khuzestan Province. The refinery. which was once one of the world`s largest. was heavily damaged during the 1980-88 Iran-Iraq war.
Pointing to optimization of Isfahan Oil Refinery. the NIORDC official said last month that Tehran finalized an agreement worth $2 billion with South Korea`s Daelim Corporation to renovate and expand that unit.
Based on official reports. NIORDC is holding talks with two high-profile Japanese companies. Marubeni and Chiyoda. for projects to curtail mazut production at Bandar Abbas refineries and final agreements are expected to be signed soon.
NIORDC signed a memorandum of understanding with South Korean engineering conglomerate SK Group last year on conducting feasibility studies on Tabriz Refinery’s development plan. based on which the refinery`s mazut output will be significantly cut in favor of higher gasoline and diesel production.
The MoU is reportedly worth $20 million but it is expected to reach $200-300 million in the next stages of development.
The government of President Hassan Rouhani has earmarked $14 billion to recondition and improve some of the big refineries. including in Tehran. Tabriz and Isfahan.
According to reports. Iran ranks 11th in the world in terms of oil processing capacity. It is the ninth producer of gasoline and 13th diesel producer. However. it also tops the list of producers pumping the unwanted and environmental-unfriendly mazut.
Asian companies have actively sought downstream projects in Iran`s emerging petroleum industry after the easing of international sanctions in January of last year. 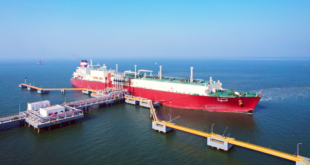