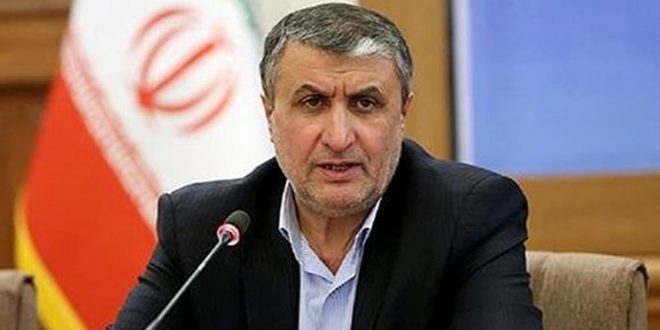 Head of the Atomic Energy Organization of Iran (AEOI) Mohammad Eslami said that his country has decided to continue progress in its peaceful nuclear program despite the obstacles and pressures imposed by the UN nuclear watchdog and the western states.
Eslami said that under articles two and three of its Statute, the International Atomic Energy Agency (IAEA) is duty-bound to encourage and assist the development and practical application of peaceful atomic energy throughout the world.
“Yet that is the only thing they have withheld from us,” he said, adding, “Not only did they withhold help, but they also created obstacles. But with the grace of God and the support of the Leader (Ayatollah Seyed Ali Khamenei), we have a glorious [nuclear] roadmap today, which we should expand in all dimensions.”
Eslami said that Iran is entitled to develop its civilian nuclear energy program, having joined the IAEA and the Non-Proliferation Treaty (NPT) as a member state and having been subject to the IAEA’s most rigorous inspections.
Nevertheless, he continued, some countries “accuse us of trying to make an atomic bomb”.
He also argued that Iran has been targeted with sanctions due to its resistance against domination.
“In all the years since the victory of the [Islamic] Revolution, we have always been sanctioned because we did not accept domination and put anti-hegemony on our agenda,” Eslami said.
Under the weight of the sanctions, he went on to say that, Iran has managed to achieve proper defensive capabilities and advance its national interests and security.
Eslami reiterated Iran’s position with regard to the Vienna talks with the world powers on removal of sanctions, saying the purpose of the negotiations is to have the US sanctions removed.
“The Islamic Republic of Iran’s stance in this regard is clear, and the negotiators follow up on the same stance,” he said.
Eslami explained that the talks are aimed at having the sanctions removed, establishing a verification regime on the removal of sanctions, and taking guarantees from the other side that they will not violate the JCPOA again.
Iran and the JCPOA participants are engaged in the eighth round of talks in Vienna to revive the Iran deal by ending Washington’s maximum pressure campaign and sanctions and bringing it back into complete compliance with the pact.
Iran and the IAEA have been at odds over several issues in recent years.
The IAEA certified Iran’s compliance with the 2015 Iran deal 15 times until 2019, when the country began to ditch some of its nuclear obligations in a legal retaliatory move a year after Washington’s unilateral withdrawal from the deal.
Tehran has criticized the Agency for taking politicized positions toward its nuclear activities.